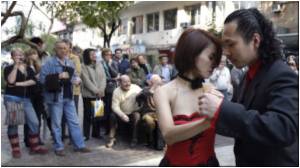 The 28-year-old snatched the title in a final dance-off against the 2012 winner, after 14 other contenders for the global b-boy championship had been eliminated.

"I'm speechless. All my effort and hard practice have finally paid off," a tired but ecstatic Hong10, who won the title in 2006, said after his victory.


Sixteen b-boys from 10 nations including the United States, Brazil, France and Japan battled it out on the dance floor in front of a sell out crowd in the South Korean capital's Jamsil Stadium.
Advertisement
Eight past winners and two wild card entrants competed with six dancers who had qualified through regional tournaments that covered some 90 countries.

B-boying, or breakdancing, originated in New York in the 1970s and then spread across the globe, gaining a devoted following in several Asian countries.

It is so popular in South Korea, that the government promotes the dance style as one of its cultural exports. Top Seoul b-boy groups like R16 and Maximum Crew have won a number of global competitions.

The Red Bull championship is one of the few individual, one-on-one contests and the 3,500-strong audience at the Jamsil arena entered enthusiastically into the gladiatorial spirit of the knockout format.

In each round of the whirlwind two-hour event, two dancers faced off on an open stage in the centre of the arena, taking turns to show off their skills to hip-hop beats.

The crowd cheered, jeered and roared as the dancers taunted each other, circling their opponents and then performing their spins, twists and aerial moves so close as to make the other dancer flinch or step back.

Five judges made of prominent breakdancers raised a paper board with the winner's name after each round, which lasted about three to four minutes.

The dancers were judged on the creativity and extremity of their dance routines as well as their attitude and showmanship during the dance-off.

The Red Bull BC One championship was launched in 2004 and the finals have been held in cities ranging from Johannesburg to Tokyo and Rio de Janeiro.

Music and Dance are Deeply Intertwined Activities
Male superb lyrebirds often move their bodies to the music in a choreographed way as they sing, ......