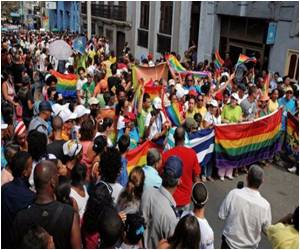 Cubans have been urged by Raul Castro's daughter to join a traditional "conga" dance against homophobia taking place in Havana on Saturday.

"We are the heirs of a strongly patriarchal Spanish culture, very homophobic and very discriminating," said Mariela Castro, whose father succeeded her uncle and revolutionary leader Fidel Castro as the island's president in 2006.

"It's time these prejudices were eliminated," she said in comments published in state newspaper Granma.


The dance, to the beat of drums and trumpets, is part of a national "day against homophobia" -- actually 10 days worth of events that started Wednesday and runs through May 18.

Traditionally stigmatized in Cuba, homosexuality was fiercely repressed for many years by the regime, which interned gays in work camps in the 1960s and ostracized them in the 1970s under Fidel's rule.

More News on:
How to Zumba Dance Your Way to Good Health