Quarter of British Children Have Looked at Pornography in 2010 ‎ 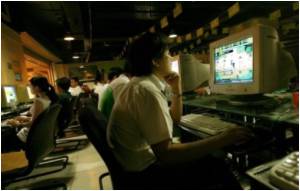 An LSE research used in a Panorama programme about the sexualisation of young children, has indicated that a quarter of children looked at pornography in 2010.

It showed that one in eight of young people aged between nine and 16 received messages of a sexual nature while surfing online or through their mobile phones.

In addition, more than half - 52 per cent - go online when they are in their bedrooms on in a room alone, making it hard for parents to monitor what they are doing.


The findings come from a study carried out by Sonia Livingstone into the UK aspect of a European wide survey into children's habits on the Internet and other media.

China has shut down over 60,000 pornographic websites this year, netting almost 5,000 suspects in the process, adding that the campaign against obscene material would continue

According to the research, 24 per cent of nine to 16-year-olds have seen some form of pornography in the last year - through the Internet, television, magazines or DVDs.

Of those, 41 per cent of parents believed that their children had not seen any such images.

Livingstone said there was cause for concern about the amount of time children spent online and what they do while on the Internet.

"I think there's a lot of experimentation going on," the Telegraph quoted Livingstone as saying.

"I think a lot of that is about sharing experiences, being in touch, seeing if other people are living the life that you are.

"Within that there is clearly a lot of flirtation and some degree of sexual experimentation," added Livingstone.

Experts have said that it is impossible to realize the plan made by the British government to block Internet pornography at source.
<< Mother or Sister - A Matter of Ethics
Twitter User's Comments on Anorexia Condemned >>

Prostitution: Fresh Stakes in the Oldest Trade
News Archive
News Resource
News Category
Milestone In Voluntary Blood Donation Achieved Samsung Reinvents Toilet for the Poor Which is a Better Form of Exercise: Daily or Weekly? First Phase of Foot-and-Mouth Disease Vaccination Shocking News: Polio Cases Return After a Decade in the US
More News
Sign up for Wellness Consult a Doctor Sign up for Selfcare

Nutam (400mg) (Piracetam) Selfie Addiction Calculator Find a Hospital The Essence of Yoga Blood Donation - Recipients Diaphragmatic Hernia Drug - Food Interactions Hearing Loss Calculator Drug Interaction Checker Accident and Trauma Care
This site uses cookies to deliver our services. By using our site, you acknowledge that you have read and understand our Cookie Policy, Privacy Policy, and our Terms of Use