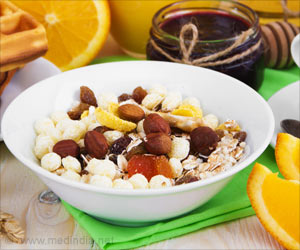 Heather Leidy, Assistant Professor of nutrition and exercise physiology at the University of Missouri, said that when kids eat high-protein snacks in the afternoon, they are less likely to eat unhealthy snacks later in the day, which is particularly important for kids who want to prevent unhealthy weight gain.

High-protein yogurt is a good option as a snack to replace high-fat snacks in your diet.
Advertisement

Male and female adolescents between the ages of 13 and 19 who were classified as either normal weight or overweight participated in the study.

They also found that the high-protein snacks improved certain aspects of mood and cognitive function.

Calorie intake is the driving factor in weight loss, especially among the overweight with type 2 diabetes, reveals study.
Advertisement

How to Choose `Healthy Food` in Restaurants

The best approach to curtail unhealthy food consumption is to use a combination of both an unhealthy label and a surcharge for unhealthy menu items, called unhealthy surcharge, reveals a new research.
Advertisement

Due to busy lifestyles, food holds the least amount of importance for many of us. Healthy snacking is not as ...

Healthy Snacks You Should Keep at Your Desk at Work

Snacking healthy foods during office hours can keep you fueled up because busy office hours can make things ...
This site uses cookies to deliver our services.By using our site, you acknowledge that you have read and understand our Cookie Policy, Privacy Policy, and our Terms of Use  Ok, Got it. Close
×