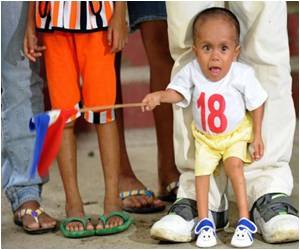 Gene mutations in some patients with Meier-Gorlin syndrome (MGS) are thought to give rise to dwarfism, small brain size, states study.

Although only 53 cases of Meier-Gorlin syndrome have been reported in the medical literature since the first patient was described in 1959, it is a malady whose mechanisms are bringing to light new functions for some of the cellular processes common to all life. Pathology related to MGS is traced in the new research to one of these, the fundamental process called mitosis in which cells replicate their genetic material and prepare to divide into two identical "daughter" cells.

CSHL President and Professor Bruce Stillman, Ph.D., a cancer biologist who has made seminal discoveries over three decades that have helped reveal the exquisite choreography of how chromosomes are duplicated in cells, led the new research, which suggests how, during mitosis, mutant versions of a protein called Orc1 contribute in two distinct ways to severe MGS pathology. The research is published online ahead of print in Genes & Development.


Components of the cellular replication machinery

Orc1 is the largest of six proteins that form parts of a cellular machine called the origin recognition complex, or ORC. As Stillman and others discovered 20 years ago, ORC in human cells attaches to DNA at specific locations throughout the genome when a cell is preparing to duplicate its genetic information and go through cell division. These locations are called replication start sites or origins. When ORC and several other helper proteins attach at these positions, each of the assembled groups of proteins is said to form a pre-replication complex (pre-RC).

A new research has determined that the wiener dog's stubby little legs hold a clue to both human dwarfism and evolution as a whole.
Advertisement
When pre-RCs have attached at all of the "start" sites throughout the genome -- a process called licensing -- cells can then begin to copy the double helix of DNA to produce two copies, one for each daughter cell. ORC enables a cell to keep track of its DNA replication and this is essential because the genetic material must be copied once, and only once.

Other roles for ORC, including centrosome regulation

Over the years, new roles for many of the ORC proteins have been found within the cell. Not only are they involved in DNA replication; as Stillman (2009) and others have shown, a number of them are also known to be involved in regulation of a cellular organ called the centrosome. Floating inside the cell's watery cytoplasm, the centrosome helps regulate the cell's progression through the cell-cycle. It ensures that the duplicated chromosomes are segregated evenly to the daughter cells. During replication, it organizes the threadlike microtubules that form a delicate spindle that segregates the two identical sets of chromosomes. Serving as anchor points for those "threads" are tiny structures inside the centrosome called centrioles. Just like DNA, which must be licensed to insure it is only copied once per cell cycle, so must the centrosome and centrioles be licensed for proper regulation of cell division.

The centrosome also plays a role in establishing cell outgrowths, such as axons in brain cells and cilia in many other cells of the body.

Stillman and Manzar Hossain, Ph.D., a postdoctoral student in the Stillman lab, have followed up clues in recent research linking mutations in the genes encoding proteins of the pre-RC, including Orc1, with mutations found in Meier-Gorlin syndrome patients. In a study published this past February, a multinational research team noted the relationship of such mutations to various manifestations of the pathology seen in 35 MGS patients. They noted that MGS patients with mutations in Orc1 were the shortest and had the smallest brain size.

The new study by Hossain and Stillman describes how Orc1 mutations cause cellular dysfunctions that contribute directly to the most severe instances of dwarfism and small brain size.

New findings about centrosome and centriole dysfunction in MGS

In their dissection of Orc1, Hossain and Stillman discovered that different domains of the Orc1 protein control centrosome copy number and DNA replication; and that both are involved in MGS pathology.

The CSHL scientists suggest that centrosome reduplication as well as dysregulation of DNA replication (in which Orc1 is also involved) are directly associated with the more severe manifestation of dwarfism and microcephaly, or abnormally small brain size, seen in the most pronounced MGS cases.

For the first time, they observed that when the Orc1-encoding gene is mutated in a manner observed in MGS patients, the role normally played by the Orc1 protein in preventing the centrosome from re-duplicating itself is disturbed. By causing defects in the duplication of centrosomes, processes such as cell division and cell signaling can go awry, leading to the severe growth defects found in Orc1 MGS patients.

This research has significant implications for processes that control body and brain size; how tissues come to be the size that they are is a little understood area of biology. Studying how mutations in centrosome biology affect tissue and body size may lead to insights into this regulation, Stillman suggests. He also notes that while Orc1 MGS individuals have a relatively small brain, they display normal intelligence, suggesting the enormous potential of the human brain.