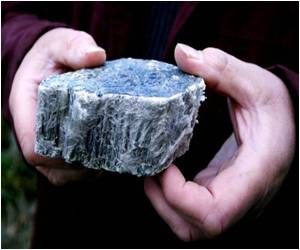 Its toughness and fire-resistant properties made people believe that asbestos were once a miracle material. It was used as insulation, incorporated into cement and even woven into firemen's protective clothing.

Over time, however, scientists pinned the cause of lung cancers such as mesothelioma on asbestos fiber inhalation. Asbestos was banned in the many industrialized countries in the 1980s, but the threat lingers on in the ceilings, walls and floors of old buildings and homes.

Now a team of researchers from the University of Hertfordshire in the U.K. has developed and tested the first portable, real-time airborne asbestos detector. They hope that the prototype, described in a paper published today in the Optical Society's (OSA) open-access journal Optics Express, will be commercialized in the U.K. in the next few years, providing roofers, plumbers, electricians and other workers in commercial and residential buildings with an affordable way to quickly identify if they have inadvertently disturbed asbestos fibers into the air.


"Many thousands of people around the world have died from asbestos fiber inhalation," says Paul Kaye, a member of the team that developed the new detection method at the University of Hertfordshire's School of Physics, Astronomy and Mathematics. "Even today, long after asbestos use was banned in most Western countries, there are many people who become exposed to asbestos that was used in buildings decades earlier, and these people too are dying from that exposure."

Scientists Say Threat from Asbestos Fibres 'seriously Underestimated'
The harmful and deadly effects that asbestos fibres may cause may have been seriously ......

Homeowners may Not be Able to Identify Asbestos in Their Homes
A survey has found that over two-thirds of people who own homes may not be confident of identifying ...

Mesothelioma
Mesothelioma is a rare, aggressive and deadly cancer of the mesothelial tissue lining the internal o...