Recently there has been a probe into the eye camp help at Himachal Pradesh in March of this year. Reports prepared and presented by a team of doctor's reveals that medicines used by patients post surgery were contaminated. The surgeon, Dr. S. K. Sharma, in his report has blamed the contamination of medicines as prime reason for causing blindness in some patients.

Most of the patients came from the Kandwal village in Nurpur, a sub-division of Kangra district. The operation screening was performed by the Nagni Mandir Committee of Nurpur, about 300 kms away.


Thorough investigation has found the presence of bacteria in the medicines belonging to the batch used in Gurdaspur. Complaints over the issue have been taken to the Medical Council of India.


"But permissions were only given for screening, while operations were held at a clinic situated in Pathankot, Punjab. We have submitted a preliminary report and further investigations would be held from Monday onwards," said Dr B L Gupta, chief medical officer of Kangra. About 300 people were examined while about 60 were operated upon despite lack of permission for performing operations at the camp.

"I have examined five patients so far and they have almost lost their eyesight. I received affidavit from them. I think more people will come forward to lodge their complaint," a team member told reporters. 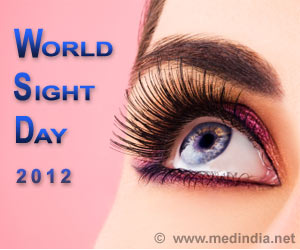 World Sight Day - 2012
World Sight Day 2012 is observed globally on the second Thursday in October each year. On this day global organizations get together to promote events that are committed to eradicate blindness.
READ MORE