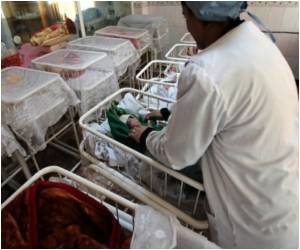 A British couple can rejoice now, for after five long months they can hold and cuddle their twin babies at last.

Born prematurely, 14 weeks too soon, in September last year at Poole Hospital in Dorset, Willow and Stanley Senior were so tiny their arms could easily fit into their father's wedding ring. Each weighed just 2lb 1oz and 2lb 3oz.

Their lungs were underdeveloped and they were so fragile that changing their nappies or giving them a cuddle was near to impossible since there was always the danger of serious injuries.


They stopped breathing 100 times during their hospital sojourn and their mother recalling the heart stopping times says, 'I've lost count of the times the doctors and nurses have saved the lives of our babies. They've been through so much. We feel really proud of them.'

After being nearly five months at the hospital, they are now at home in Bournemouth, a healthy 11lb 7oz and 9lb 15oz. And their proud parents, Leela and Anthony Senior can hold them and cuddle them all they want!