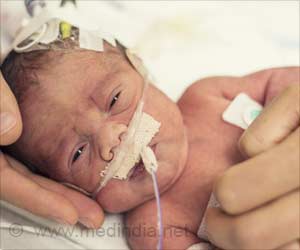 Premature births come along with their own set of problems for the babies. Physical, cognitive and their overall health also sometimes takes the toll and health risks become more prominent as they age.

Here is a fighter baby, who is in a rush to see the world. His fight commenced even before birth during a highly complicated and pre-term pregnancy.

Advertisement
‘A 24-week baby, the youngest premature baby in Andhra Pradesh, has survived due to the advances in medical technology and neonatology.’

The baby boy, conceived through IVF at the Vizag IVF Centre, weighed a mere 650 gm at birth. The chance of survival of such babies is minimal even by western standards. It was made possible with the round-the-clock care and state-of-the-art infrastructure at the hospital, said Dr. Sai Sunil Kishore, neonatologist.


The baby boy was transported to the hospital by the transport team from Vizag IVF centre, at a low weight of 650 gm in an extremely critical state. The normal weight for a newborn is around 2.5 to 3 kgs. "His lungs and other organs were functionally immature, the baby's development was stunted, He was prone to severe infections and had extremely low immunity," said Dr Kishore and added that this has been one of the most complicated cases he has handled.

Babies born at 22-24 weeks are considered 'the limits of viability' and chances of survival are minimal at best even by Western standards.

More News on:
Caring for a Premature Baby

Youngest Premature Baby Born At 23 Weeks Gets To Go Home Healthy
Baby Sakshi born on May 5, weighed barely 460 grams and she was about 30cm from head to toe. ......

6-Day Old Premature Baby is the Youngest to Receive a Heart Transplant
A 6-day old premature baby, Oliver Crawford, has become the youngest infant to receive a heart ......