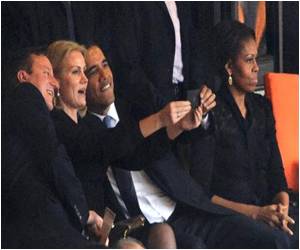 Voters have been urged by South Africa's election watchdog to refrain from taking ballot paper "selfies".

"Voters are reminded that it is an offence to take and/or publish photographs which reveal a person's vote on a ballot paper," said a statement on Sunday.

The Independent Electoral Commission (IEC) says the offence is punishable by a fine or imprisonment of up to a year.


The organisation said exuberant expatriate voters around the world had already posted pictures of their marked ballot papers on social media.

South Africa goes to polls on May 7 in the fifth democratic elections after the fall of apartheid in 1994.
Advertisement
While the IEC said it was committed to monitoring the regulation, it admitted that it would be difficult to remove cameras or mobile phones from every voter before entering the voting booth.

Social media networking is popular in South Africa, with a latest study in March showing that Johannesburg has largest number of active Twitter users in the continent.

Clicking Selfies for Perfect Look and Angle? Its Body Dysmorphic Disorder Not Addiction
These days, in case you find yourself obsessed with clicking lots of selfies, then according to ......

Priests in the Philippines Post 'Selfies' on Social Media
Until they took their first "selfies" and posted them on Facebook, some of the Philippines' most ......