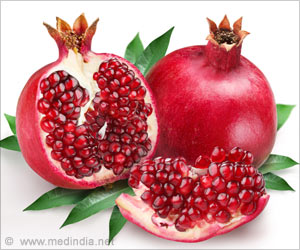 Eating a pomegranate-rich diet may reduce inflammatory bowel diseases, reports a new study. The findings of the study are published in the journal Nature Communications.

Millions of people suffer from inflammatory bowel disease (IBD) worldwide, either in the form of ulcerative colitis or Crohn's disease, and few effective long-term treatments are available.

Chronic intestinal inflammation is a hallmark of IBD. The gut barrier is a single-cell epithelial layer that provides protection against antigens and toxins present in the gut. Gut barrier integrity is maintained by the tight junction proteins such as claudins (Cldn), Zona occludin-1 (ZO1), and occludin (Ocln) that keep cell-cell junctions tight. Loss of junctional proteins in IBD increases gut permeability. Thus, toxins leak out causing chronic inflammation. As of now, there are no effective drugs to induce tight junction proteins.


The therapeutic modalities--such as steroidal immunomodulators and non-steroidal anti-inflammatory drugs (NSAIDs)--are inefficient in the treatment of IBDs. On the contrary, NSAIDs cause severe side-effects leading to further barrier dysfunction.

Pomegranate is a naturally occurring mystical and miraculous superfood with multiple therapeutic properties. Since centuries, pomegranate has been revered as a sacred symbol of prosperity, fertility, youthfulness and a life giving fruit.
Advertisement
Now, a team of scientists from the Institute for Stem Cell Biology and Regenerative Medicine (inStem), Bangalore, and University of Louisville, USA, have ascertained that a microbial metabolite (Urolithin A (UroA)) derived from berries and pomegranates, and its novel synthetic analog, can mitigate IBD by increasing proteins that tighten epithelial cell junctions in the gut thereby reducing the gut inflammation. These pre-clinical research findings--published in Nature Communications --shows the mechanism by which UroA and its analog not only reduce inflammation and restore gut barrier integrity, but also protect against colitis. In this paper, Praveen Kumar Vemula and Venkatakrishna Rao Jala are the senior authors, with Rajbir Singh as lead author.

"Restoring the gut barrier and reducing the inflammation using a small-molecule will provide a better therapeutic output in the treatment of IBDs," says Dr. Vemula, Research Investigator at inStem. "A synthetic analog overcomes the stability limitation that a microbial metabolite poses, thus enhancing the efficacy."

"Microbiota in our gut has evolved to generate beneficial microbial metabolites in the proximity of the gut barrier," adds Dr. Jala, Assistant Professor at the University of Louisville, "however, the exact role of these metabolites have not been identified and the mechanism in which they exert their function is elusive."

In pre-clinical studies conducted by the researchers, oral administration of either UroA or its potent version synthetic analog has clearly shown the beneficial effect in reducing the colonic inflammation, in acute and chronic colitis. A series of in vitro and in vivo experiments revealed that these small molecules reduce gut permeability by restoring the epithelial barrier by overexpressing the junctional proteins.

"The general belief thus far in the field is that Urolithins have a beneficial effect only through their anti-inflammatory property. We have for the first time discovered that their major mode of function is repairing the gut barrier dysfunction," says Rajbir Singh, a postdoctoral fellow at Univ. of Louisville.

According to Haribabu Bodduluri, professor of Microbiology and Immunology at UofL and an author on the manuscript, "the most significant finding reported here relates to the novel mechanism of action, where selective low-level activation of Aryl Hydrocarbon Receptor enhancing the barrier integrity while also preventing toxic activation of this receptor."

Importantly, these agents have shown dual efficacy, i.e., the therapeutic and prophylactic effect. Administration of these agents after mice have developed full colitis has reversed the phenotype significantly by reducing shortening of colons, gut permeability, and inflammation. When animals were fed with UroA or its synthetic analog prior to insulting with TNBS, mice did not develop colitis. Therefore, proving the protective nature of these compounds against gut inflammation. These results suggest that UroA/UAS03 mediated enhanced gut barrier function will likely have long-term beneficial effects in preventing colitis.

"Most potent synthetic analog of UroA developed here could be a potential new chemical entity to mitigate IBDs," says Taslimarif Saiyed, from the Centre for Cellular and Molecular Platforms (C-CAMP), who is also a contributing author of the paper.

Vemula and Jala are in the process of setting up a start-up based on this technology, and aiming to take these molecules to IND stage. Their mission is to develop new chemical entities for the treatment of IBDs.