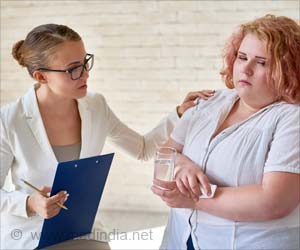 New study highlights that depression and obesity can significantly increase the likelihood of chronic hip pain.

In a representative sample of the German population, older age, obesity, and depressive disorder were associated with experiencing chronic hip pain.

Obesity is a condition where there is excess accumulation of body fat which poses a risk to the health of the individual. It can affect children and adults.
Advertisement
‘An enhanced version of smartphone software linked with emergency services or family members aids to detect and treat opioid overdoses earlier.’
Read More..
Tweet it Now


Obesity and increased values on a depression scale were associated with a 2.55-times and 8.53-times higher likelihood of chronic hip pain, respectively, compared with individuals without pain.

Depression occurs due to alterations in the levels of neurotransmitters in the brain.
Advertisement

cortisone injection did not provide better outcomes than dry needling for either pain or function in patients with greater trochanteric pain syndrome (GPTS).

Are you experiencing pain due to damaged hips? Travel abroad to get replacement surgery at affordable ...