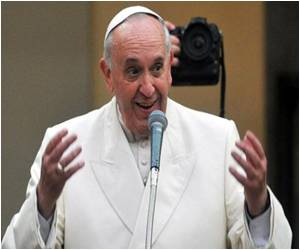 John Paul II, the charismatic Polish pope who made a name for himself by circling the globe, was widely regarded by one and all worldwide.

"He broke protocol. I know that security had trouble keeping an eye on him. He sometimes wandered off when he felt like it," Warsaw sociologist Pawel Boryszewski said of the soon-to-be saint who died in 2005.
Advertisement

Throughout his 27-year papacy, the polyglot and onetime actor travelled to more than 100 countries, embracing modern ways of spreading the Gospel -- with an approachability hitherto alien to the church.


Over the years the former Karol Wojtyla built up a loyal following that is still alive and kicking, first and foremost at home but also in other Catholic countries where fans are finding special ways to mark his canonisation.
Advertisement

A Polish marathoner is running to Rome in time for the April 27 mass that will make saints of John Paul II and John XXIII, an event expected to draw up to five million people from across the world.

A German car collector is making the journey in a vehicle that once belonged to the pontiff himself -- now spruced up and with the licence plate IL JP2H, the H standing for the German for saint.

In the Philippines, Asia's Catholic outpost, hundreds have turned out to kiss his relics, including hair strands, bloodstained clothing and a cassock, on exhibit at various venues there over the coming months.

"I am so happy. I am ready to die now that I have seen his relics," retired grade school teacher Gene Suarez, 67, told AFP at a Manila chapel.

In Ireland, pope-themed items are going fast at shops linked to the country's top Roman Catholic shrine in Knock, which John Paul II visited a year into his papacy in 1979.

"People (are) coming along again looking for items related to him, be that a picture, a relic, a prayer card or whatever," said Peg Carmody, manager of the Knock Shrine Souvenir Shop.

Though Ireland is no longer as staunchly Catholic, the doctrinal conservative's influence is still felt, according to Father John Harris, editor of a new book celebrating his sainthood.

"His teaching on the culture of life and the importance of every human person, and the dignity from the womb to the tomb, has left a very large legacy and that could be seen in the recent pro-life demonstrations," the Dubliner told AFP.

Catholics in Argentina may now be more jazzed about their own pope, but they still remember the Polish pontiff for his mediator role in preventing a war with Chile in 1978.

"I believe he was the kindest pope," said Buenos Aires student Paola Minoscal, adding however that her image of him took a hit from the paedophile priest scandals.

"He knew many things about what was happening between priests and children," the 26-year-old Ecuadorian said in a claim also heard elsewhere.

But any criticism of "Our Pope" is a no-no in his native Poland, where he is a national hero and top moral authority -- even today -- and is beloved like nowhere else.

"It's said of those who criticise him that they had hoped to become bishops but didn't. And that's why they criticise," said Boryszewski.

The first non-Italian pope in more than 400 years and the first from eastern Europe, John Paul II was a source of strength and hope for Poles, who credit him with helping topple Communism.

"He was made pope at a particular moment in time, probably the best possible moment in history for us to have gotten him," said Katarzyna Uklanska, a Warsaw sociology student who wrote her doctorate thesis on the pontiff's posthumous role.

That view of him as political player is shared by other ex-Soviet states in the region including Slovakia, where the avid sportsman enjoyed hiking and is considered "the most popular pope" according to Slovak religion expert Imrich Gazda.

"Given the long term he served, many generations still view him as THE pope," added Slovak Bishops Conference spokesman Jozef Kovacik.

John Paul II will be remembered for eschewing the pomp that surrounded his predecessors and seeking contact with ordinary people, be they Communists or Jews or Catholics, even paying a prison visit to the Turk who tried to assassinate him in 1981.

"Throughout his whole life he displayed that humanity in such a way that even nonbelievers considered him a wonderful person," said Halina Marciniak, an educator and head of a group of nearly 1,300 Polish schools that carry his name.

"And what he preached moved everyone... That kind of person doesn't come along very often. That's why I think his cult following will endure."

Fight Against Human Trafficking 'Scourge' Led by Vatican
Setting up of a global task group to fight human trafficking was agreed on Thursday by police ......