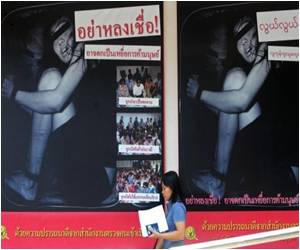 Setting up of a global task group to fight human trafficking was agreed on Thursday by police chiefs and clergymen from over a dozen countries, a scourge Pope Francis called a "crime against humanity".

At the end of two-day conference hosted by the pontiff, London's Metropolitan police commissioner Bernard Hogan-Howe said attendees, including top cops from the FBI and Interpol, had agreed to meet regularly to fight the ravages of modern slavery.


At the meeting, Francis said the church and police must work hand-in-hand to fight "this crime against humanity": the police to offer the "rigour of the law" and the clergy to provide "compassion".
Advertisement
The International Labour Organization estimates that trafficking generates $32 billion (23 billion euros) a year in revenue and involves 2.4 million people.

Francis frequently refers to human trafficking as a "scourge" of the 21st century. As archbishop of Buenos Aires, he also took part in initiatives to get women out of prostitution.

Conference attendees said that by working with the church, police forces can help victims -- especially those caught up in sex work -- break through feelings of shame and see themselves as victims.

In talks last month, Francis and US President Barack Obama agreed to combat the illegal trade and called the conference "a practical step in fulfilling this aim".

Police chiefs from the Americas, Africa, Asia and Europe attended, including from countries where human trafficking has been a particular problem like Albania, Brazil, Nigeria and Thailand.

The next meeting of the group of officials and clergy, now dubbed the Saint Martha's group after the pontiff's residence, will be in London this November.

Human Trafficking Still Persistent in Australia
In Australia, an inquiry has been launched over a number of societal problems including sex slavery ...

Forced Marriage and Human Trafficking to be Criminalized in Australia
Forced marriages and human trafficking for sex industry and organ donation is to be criminalized in ...

US Human Trafficking List Drops Philippines, Singapore
The United States has removed the Philippines and Singapore from a human trafficking watchlist that ...