Pneumonia, Diarrhea, and Malaria Identified as the Primary Causes of Death of 6 Million Poor Children 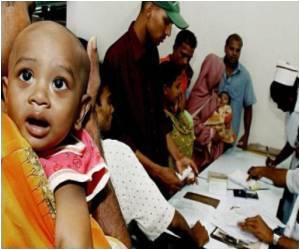 A team of researchers from Johns Hopkins University have recently discovered that pneumonia, diarrhea, and malaria are the primary causes of death of 6 million poor children worldwide.

Robert Black, MD, Chair, Johns Hopkins Bloomberg School of Public Health's (JHSPH) Department of International Health, and noted expert on child mortality, today called on leaders in donor and developing nations to take action to address the terrible death toll. "We now have in hand the latest country-specific estimates of the major causes of child deaths," he said "This should help to focus national programs and donor assistance on the solutions that are most likely to be effective. Achieving the global goal of reducing child mortality by two-thirds is only possible if the high numbers of deaths are addressed by health interventions, including vaccines."

Black joined local public health officials, vaccine researchers and advocates for child survival at a briefing in Baltimore sponsored by the GAVI Alliance (formerly the Global Alliance for Vaccines and Immunizations) and the Johns Hopkins Bloomberg School of Public Health to review the impact and promise of new vaccines, particularly those that can prevent some of the most common causes of pneumonia and diarrhea in children. But the event also celebrated the City of Baltimore's success with immunizations to improve the health of even its poorest and hard-to-reach children.


Baltimore is one of six US cities to dramatically improve their immunization rates , "showing what political will and the courage to take action can accomplish," said Helen Evans, Deputy CEO of the GAVI Alliance.

The Acquired immune deficiency syndrome is brought about by the deadly human immunodeficiency virus. In the USA alone an estimate of 120,000 - 160,000 women are HIV- infected.
Advertisement
New vaccines against deadly causes of pneumonia, meningitis and diarrhea have reduced costs and cases of disease in Baltimore, as well as elsewhere in the United States, but in the poorest countries, where repeated bouts of diarrhea or a raspy breath can signal very serious illness for which there is no access to treatment, the availabilities of new vaccine technologies can be a matter of life and death. "With increased leadership and financial support from the US and other donors, we could do globally what Baltimore is doing locally," said Evans. "With an additional $2.6 billion over the next five years, we can prevent about four million deaths by 2015 among the children most at risk, including one million from pneumococcal disease and rotavirus diarrhea." Baltimore's Immunization SuccessPeter L. Beilenson, MD, MPH, Health Officer of Howard County, Maryland, and Baltimore's health commissioner under Mayors Kurt Schmoke and Martin O'Malley, remembers what it took to get started with the drive to boost immunizations in the city, when a small group of dedicated health professionals and advocates began to make their case to political leaders. "The average parent doesn't typically know the laws regarding vaccination schedules, so public health authorities need to push public officials into action in order to make immunizations a top priority," he said. In order to boost compliance to immunization laws, Baltimore launched a massive public relations campaign warning parents that children would be excluded from entering school if they were not properly immunized, and action would be brought against the parents of children kept out of school for more than 20 days by the state attorney's office. In addition, the city ran school immunization clinics for school-age children as well as their younger siblings. In this way, Beilenson notes, "It was a tide that lifted all boats, as we were also able to also immunize the city's two- and three-year-olds."

In just three months, Baltimore's immunization rates for school-age children went from 62 percent to 99 percent. "Baltimore's commitment and success in caring for some of the city's children, many of them poor and from African-American communities, represents in miniature what the GAVI Alliance and the JHSPH are seeking to do globally in order to achieve the fourth Millennium Development Goal and reduce by two-thirds the deaths of children under the age of five," said GAVI's Helen Evans. Assessing the Causes of Childhood Mortality Globally

According to Black, the battle against child mortality and illness, whether in Baltimore or Bamako, must begin with assessing the causes.

"It's not enough to know that a lot of the children are dying of infectious disease," said Black. "If we don't know why, we won't know which solutions will work, how to select interventions that would be most cost-effective, and who is most at risk."

Black and his team of researchers at Johns Hopkins and other institutions recently published new data indicating that "the most important causes of death of children younger than five years were infectious diseases, especially pneumonia, diarrhea, and malaria. "

In publishing their conclusions, Black and his colleagues wrote, "...nearly all countries still face the challenge to reduce child deaths from preventable conditions, irrespective of their number or cause. These national estimates of the causes of child death in 2008 should help to identify priority interventions for child survival, and how to allocate national and international resources."

Dr. Anne Bailowitz, Acting Chief Medical Officer for the Baltimore City Health Department, attributes Baltimore's continued success in maintaining good immunization coverage to a persistent effort that includes a multi-pronged approach including: mandatory physician reporting to a computerized immunization registry; facilitating targeted vaccination clinics in areas with low compliance; and vigorous parent and professional immunization education. One of the ways the city ensures wider coverage is by dispatching a mobile van (TIKE) throughout the city that brings free immunizations to children who might not otherwise have access.

"There was no magic bullet," says Bailowitz, "We've been working on this problem since the mid-1990s, but we have the support of medical providers who are proactive, early adapters of new immunizations such as Prevnar and Varicella."

She also credits the national program, Vaccines for Children (VFC), which provides free vaccines for underinsured or non-insured children, as well as a law in Maryland requiring all children to be immunized before they start school, for helping the city boost its numbers.

Despite its successes, Baltimore continues to have one of the highest infant mortality rates in the nation. In 2008 alone, 120 infants died, many of those deaths preventable. The city also has an extremely high rate of babies born pre-term and underweightkey factors in infant mortality. To address this public health crisis, the Baltimore City Health Department has launched a campaign called B'more for Healthy Babiesa public-private partnership which brings together leaders from the corporate, nonprofit, and government sectors to prevent infant deaths and promote better family health.

"It takes the will and the leadership from every aspect of a community to make a difference," said Avril M. Houston, MD, Assistant Commissioner for Child and Maternal and Child Health for the Baltimore City Health Department. "We must reach the hardest-to-reach women, because once they have entered care, we can ensure that providers have access to public and community resources and tools needed to keep all babies healthy. This initiative enhances the infrastructure necessary to support lasting systemic change."

B'more for Healthy Babies is the first citywide program to use evidence-based solutions to reduce infant deaths. Efforts will be focused in three high-risk communities identified through epidemiological data.

Cutting-edge new vaccines have improved the health of some of the most at-risk populations of Maryland's children, particularly those of African descent, according to Susan Panny, MD, of the Maryland Department of Health. Vaccines that protect against pneumonia and meningitis in particular have been vital in helping the state reduce illness and death among children with sickle-cell anemia. She recalls a time in the United States when five percent of children with sickle-cell disease died before their second birthday and 10 percent of them before they turned ten. Most of the time, she says, infectious disease was the cause.

Children are screened at birth now, and given pneumococcal and Hib vaccines that have dramatically lowered the mortality rate. She noted that among children with sickle-cell between one and four years of age, Maryland has the lowest mortality in the United States.

"It is a bad year when we lose a single child," Panny said. "I'd like to live to hear a public health doctor in New Delhi or Kampala say the same thing about the kids they're taking care of."Infectious diseases can strike any child, anywhere. Those who are born with sickle-cell disease are, however, particularly vulnerable. Sickle-cell disease occurs when a child gets two copies of a geneone from each parentwhich leads them to have malformed red cells (the cells that carry oxygen in the blood). This genetic condition makes them particularly susceptible to serious bacterial infections by interfering with their immune system's ability to clear infections. Wherever malaria occurs, sickle-cell disease is also found, so not surprisingly, African children, and children born to parents of African descent are at particularly high risk.

Josh T. Lozman, Chief of Staff to the CEO & Senior Advisor, Global Health Policy at the ONE Campaign, agrees that the time is ripe for the United States as a leading G-8 donor to take bold leadership against the biggest, preventable killers of children in the world. "America has always been a champion in saving the lives of the most vulnerable among us and, with renewed support of GAVI, can chart a course where children don't die from preventable diseases. Diseases don't care about borders or wealth or status and helping nations immunize their children today will better ensure their livelihood tomorrow," said Lozman.

According to Evans, "We have the evidence that pneumonia and diarrhea are two of the biggest child-killers in the world, and we have the tools to lessen this problem, yet the GAVI Alliance still needs US$4.3 billion to meet its goal of supplying the latest life-saving vaccines to millions of children in poor countries by 2015." Current levels of funding will meet 40% of this challenge, mainly to maintain current programs, leaving an additional US$2.6 billion to be raised over the next six years to introduce new vaccines. On 6 October, GAVI is holding a meeting in New York City in order to give the Alliance a firmer financial basis on which to plan. This event will provide current and potential GAVI donors with an opportunity to announce pledges to fund GAVI programmes for the period 2010-2012 and beyond.