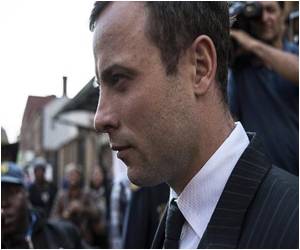 While the murder trial of South African Olympian Oscar Pistorius has generated immense interest around the globe, with the trial being broadcasted live on television, it is being used as a study material in South African classrooms.

When Faith Kholofelo took her exams in June she faced a question about the trial -- one of many students being taught legal principles through the courtroom lens.

While adults have been quick to judge the innocence or guilt of the star sprinter, students are taught to take a more measured approach and see Pistorius as innocent until proven guilty.


"Teachers say we must wait until the court decides," said Kholofelo, an 18-year-old dressed in the grey and yellow school uniform of Lotus Gardens Secondary School in Pretoria, the country's administrative capital.
Advertisement
Pistorius, known as the "Blade Runner" for his prosthetic legs, is charged with murdering his model girlfriend Reeva Steenkamp on the night of Valentine's Day last year.

The double-amputee claims he mistakenly shot Steenkamp through a locked toilet door, believing she was an intruder in his upmarket Pretoria home.

Prosecutors argue that he deliberately killed the 29-year-old law graduate after an argument.

"You have the right to fight until you're found guilty or innocent," said Donnavan Fourie, a 14-year-old wearing a green tracksuit jacket with a black backpack slung over his shoulder.

"Everyone has the right to a fair trial. But you have to speak the truth," said Fourie, on his way to Laerskool Boerefort in Pretoria.

"If you don't speak the truth, someone will find out."

As the Pistorius trial enters its last stages -- lawyers presented final arguments this week -- the decision to allow the trial to be broadcast live is already reaping educational benefits.

"I'm not certain that in his decision to broadcast the trial (the judge) had education in the forefront of his mind, but it has had that unintended side effect and it has been a powerful tool," said Kelly Phelps, a senior law lecturer at the University of Cape Town.

"I think adults have been very quick to jump to judgement, whereas students have been much more open minded, much more sceptical in their approach," said Phelps, who uses the Pistorius trial to teach legal concepts such as the burden of proof and inferential reasoning.

"Students are reserving their judgements until they've seen all the facts play out."

The massive media attention on the trial has been criticised by Pistorius' lawyer Barry Roux, who said some potential defence witnesses did not testify because the glare of the international media was too intense.

But others say the case has proved instrumental in classrooms as a way to understand and analyse the past.

"The positive side is that there has been a far greater awareness of the legal process because it has been played out at such length," said John Illsley, a history teacher at Pretoria Boys High School where Pistorius was a pupil.

Illsley said he was doing a lesson on French military leader Napoleon, when his students drew a parallel between the doomed conqueror and Pistorius.

"They regarded it as a fall from grace," said Illsley. "It's interesting as to how a couple of the boys latched onto the Oscar trial as an example."

Other teachers are incorporating the Pistorius trial into their curriculum.

Willem Gravett, a lawyer and law lecturer at the University of Pretoria, says he plans to use tapes of the case to teach hundreds of students trial techniques in his civil procedure course, starting in September.

"You have two of the best trial lawyers in South Africa against each other," said Gravett, referring to Roux and prosecutor Gerrie Nel. "I don't think you can get a better teaching tool."

It helps that the trial can be shown on the television, he said.

"These days students want to see and hear, they don't just want to hear from me standing in front of the classroom," he said.

"As a teaching tool to show how the criminal justice system works, the trial is exceptional."

Experts Claim Pistorius' Handwriting Indicates 'multiple Personalities'
According to experts, a thank-you note written by Paralympic star Oscar Pistorius to a fan in 2011 ....

First Sochi Olympics Doping Case Confirmed by IOC
The first doping case of the Winter Olympics was confirmed by the International Olympic Committee .....