Eating pistachio nuts every day can keep your health hale and hearty, says a new study.

According to researchers at Penn State conducted the study to investigate the way pistachios lower cholesterol.

Controlled feeding experiments provide all the food eaten by study subjects for the duration of the study segment.

The participants began the study by eating a typical American diet consisting of 35 percent total fat and 11 percent saturated fat for two weeks.

They then tested three diets for four weeks each with about a two-week break between each diet. All three diets were variations on the Step I Diet, a cholesterol-lowering diet in general use.

The diets included, as a control, a Step I Diet with no pistachios and about 25 percent total fat and 8 percent saturated fat. The pistachio enhanced diets were Step I Diets with 10 and 20 percent of the energy supplied by pistachio nuts, respectively.

The participants ate half their pistachios as a snack and the rest incorporated into meals.

The researchers report in the most recent issue of the American Journal of Clinical Nutrition that "Inclusion of pistachios in a healthy diet beneficially affects cardiovascular disease risk factors in a dose-dependent manner, which may reflect effects on Stearoyl CoA Desaturase (SCD). "

The researchers used the ratio of two fatty acids, 16:1 and 16:0 in plasma as a marker for SCD, an enzyme that is involved in the body''s synthesis of fatty acids. 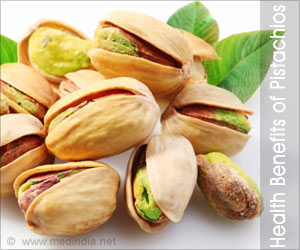 Health Benefits Of Eating Pistachios
Pistachios are dry tasty nuts packed with nutrients such as vitamins and minerals that are essential for the body. Pistachios have numerous health benefits that are needed for overall health.
READ MORE