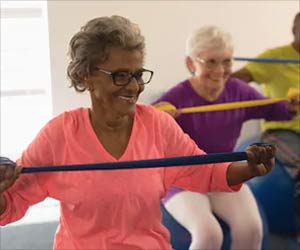 A randomized controlled trial of a new disability prevention intervention, called Positive Minds-Strong Bodies (PMSB), indicates that improving coping skills and physical strengthening can significantly improve functioning and mood in racial and ethnic minority and immigrant older adults. A report on this multi-site clinical trial is being published in the American Journal of Geriatric Psychiatry and is available online.

A team led by investigators at the Disparities Research Unit in the Massachusetts General Hospital (MGH) Department of Medicine developed the PMSB intervention to meet the needs of racial and ethnic minority and immigrant older adults who are greater risk for disability yet often lack culturally competent health services. The PMSB intervention consists of 10 individual sessions of cognitive behavioral therapy (PM) concurrently offered with 36 group sessions of strengthening exercise training (SB) over six months. To the researchers' knowledge, PMSB is the only intervention of its kind offered by community health workers, or paraprofessionals, to mostly minority and immigrant elders.


"Our study is one of few addressing disability prevention for ethnic/racial minority and immigrant elders in four languages," says corresponding author Margarita Alegria, PhD, chief of the disparities research unit at MGH and professor in the Departments of Medicine and Psychiatry at Harvard Medical School (HMS).
Advertisement
"The combined intervention significantly improved mood symptoms and functioning in a diverse sample of elders. Participants reported feeling that the culturally tailored intervention made them better understand their problems and how to cope with them, learning skills and exercise that could help them feel and function better. Our work also addresses the national shortage of a disability prevention workforce by providing evidence for the use of community health workers."

To test the effectiveness of PMSB, the researchers conducted a randomized controlled trial of 307 participants, funded by the National Institute on Aging and the National Institute of Mental Health. The MGH team collaborated with community-based organizations in Massachusetts, New York, Florida, and Puerto Rico serving minority elders, where data was collected, between May 2015 and March 2019.

The PMSB intervention was delivered to English, Spanish, Mandarin and Cantonese-speaking adults 60 years old or above who were not seeking disability prevention services but eligible based on their elevated mood symptoms and minor to moderate physical dysfunction. Results at six months showed significant intervention effects: improved functioning and lowered mood symptoms. These effects were sustained, with days where the person could not perform their usual roles (i.e. disability days) significantly decreasing 6-months after the intervention. The first report on this large trial shows the PMSB is a promising intervention for reducing disability for racial and ethnic minority and immigrant elders

As the number of individuals aged 65 and over rises to 81 million by 2040, nearly 20 percent will suffer from one or more mental health conditions, with mood disorders the most important risk for premature disability. Considering that one third of older adults in the US are expected to belong to racial/ethnic minority groups by 2040, the disability prevention field desperately needs to provide mental and physical health services that are culturally competent for all older adults. The components of the PMSB intervention are critical steps in the right direction.