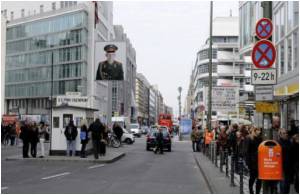 Photographs capture fleeting moments in time. But if an image could show an entire century, what would be revealed?

The world's richest photography award is bagged by a Chinese amateur whose image was that of a makeshift classroom in a poor village in the southeast of his country.
Advertisement

Using ultra-long-exposure cameras, he has set out to document Berlin's shifting urban landscape over the next 100 years.


The 42-year-old, based between San Francisco and northern Italy, invited people from this week to take one of 100 small pinhole cameras and place it in a strategic Berlin location.

'Most Photographed Cities' on Earth Revealed

List of the most photographed locations on Earth using data from geolocated images uploaded by individual users has been released by Google.
Advertisement
To add to the fun, he's asked them to keep mum about where they have hidden their "photographic time capsule", only revealing its location in their old age, to a child who could in turn wait until adulthood to retrieve it.

Keats is promising that whoever returns a camera 100 years from now to his partners in the project, Berlin-based Team Titanic gallery, will see their photo go on display -- and get their 10-euro ($14) deposit back.

"I will not be in attendance," the artist said, dryly, in an interview with AFP for the project launch.

But he doesn't mind at all.

The self-styled experimental philosopher wants to probe how "putting a camera in the hands of the unborn" can make people scrutinise the legacy of the decision taken today for their city.

"The first people to see these photos will be children who haven't yet been conceived," Keats said.

"They're impacted by every decision we make, but they're powerless. If anyone has the right to spy on us, it's our descendants."

He describes what he is doing as, effectively, "surveillance" -- intentionally using the "highly loaded" word.

But his aim is to provoke discussion, especially following the uproar caused by recent revelations of mass US spying.

"Nothing is hidden here, except for the cameras themselves."

So how will the 100-year photographs work?

With simplicity and, of course, durability uppermost in mind, Keats' steel canister cameras use black paper, instead of photographic paper, that will fade with the highly focused and very low light trained through the pin hole.

"If you have a camera directed towards some houses and those houses get bulldozed after 25 years and they build a skyscraper, what you'll see are just the ghosts of the houses, a shadow of the houses.

"The skyscraper will be bolder in the same image. It'll be a double exposure in effect," he said, adding that minor changes in the image, such as day-to-day human activity, would not register.

Dressed in an everyman sweater and jeans, the bespectacled Keats, whose past projects include ballet for honeybees and a travel documentary watched by plants, admits there is plenty that could go wrong.

"First of all the technology hasn't been tried and as a result we are working based on some assumptions," he said.

But plans are already afoot to organise the project in other cities and Keats even hopes the United Nations could get involved.

The German capital has undergone rampant change in the almost quarter century since the Berlin Wall fell, one of the reasons it was chosen for the photographic project.

The challenge for those hiding the cameras is to choose a spot worthy of century-long observation, said Julia Schulz, of Team Titanic.

"It'll be interesting to see if people choose a well-known place such as the Berlin Wall -- or their own little plot of garden."

The recent advances in digital photography, including the level of detail available, can be effectively used in forensics to catch criminals, a new study led by a University of York psychologist said.
Advertisement
<< Violin Strings Made from Human Hair
New Device Will Help Travellers Track Their Luggage >>

Bored Of Your Smartphone Calendar? Worry No More! A New App Makes Your Calendar More Bubbly By Including Happy Photographs