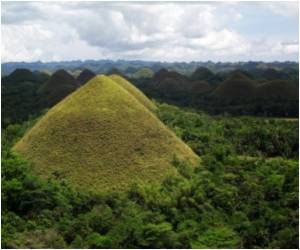 An unlikely start for a boy now hailed as an inspiration for children around the world. Cris Valdez began life unwanted by his parents and was soon scavenging in a Philippine rubbish dump.

Valdez, 13, won this year's International Children's Peace Prize for his work as head of a charity organisation that educates and hands out gifts to thousands of youngsters in his poverty-plagued hometown.

South African human rights activist and Nobel Peace Prize winner Desmond Tutu gave Valdez his award at a ceremony in the Netherlands in September, declaring him a "voice for the voiceless" and a "true inspiration".


After returning to the streets of Cavite, a coastal city on the outskirts of Manila, Valdez spoke in a soft voice to AFP about his noble philosophies that emerged from personal devastation and the people who turned his life around.

The Philippine FDA have ordered recall of six brands of South Korean noodles from the local market after it was found to contain a cancer-causing chemical.
Advertisement
"I help because I see myself in children who roam and live on the streets," Valdez said during one of his weekend community outreach programmes.

"Some good-hearted people showed me love and changed my life, and I am just paying it forward."

Valdez, nicknamed "Kesz", was born the third of nine children from a desperately poor couple who lived with hundreds of other squatter families on the fringes of a huge garbage dump in Cavite.

The city was once a picturesque, colonial Spanish enclave and fish port, but deteriorated into a mostly rundown urban mess in a familiar pattern across the country where a quarter of the population now live on less than a dollar a day.

His parents called him "bad luck" because they tried to sell him when he was a baby but failed, according to Harnin Manalaysay, the head of a local Christian youth charity who eventually rescued Valdez.

Manalaysay said Valdez was forced to start scavenging in the garbage dump from the age of two.

At ages three and four, Valdez was sleeping anywhere he could, including atop tombs at the city cemetery, because he frequently fled home to escape beatings by his rickshaw-driver father, according to Manalaysay.

At an age when children are just learning how to make friends, Valdez was learning to beg and steal.

"I found him sleeping on a curbside covered in flies. He was very dirty and being kicked by passers by," Manalaysay said.

Manalaysay enrolled Valdez, then aged four, in his alternative learning programme for street children, in which volunteer teachers use mobile classrooms on pushcarts to bring classes to the students.

In between lessons, Valdez still scavenged for scraps to help out his family.

Then bad luck struck Valdez again when he was five.

Fellow scavengers jostling around a dump truck accidentally shoved him into a pile of burning tyres, badly injuring his arms and back.

"My father was angry when I came home and said I deserved it for being stupid," Valdez recalled.

Valdez said his mother took him to Manalaysay, who paid for his medical treatment and allowed him to recuperate at the charity worker's shelter for street children, called Club 8586.

"She came back (months) later to tell me they did not want him back anymore," Manalaysay said.

Manalaysay, a portly marine engineer whose club has been helping troubled youths for more than 27 years, became his legal guardian.

Under his tutelage, Valdez recovered, and his grades improved.

He also began volunteering as a six-year-old to teach other street children about basic hygiene.

When Valdez turned seven, Manalaysay asked him what he wanted as a birthday gift.

"I told him I wanted other children to receive what I had: rubber slippers, toys and candies," Valdez said.

So Valdez and his guardian spent the day giving various items to street children.

The giving became a yearly tradition and led to the creation of Valdez's own charity, called Championing Community Children.

Under Manalaysay's guidance, Valdez built the charity into one that raises funds from private donors to buy basic living items for children, including sandals, toys, food and clothes.

Volunteers, made up mostly of Valdez's friends, also teach basic hygiene, nutrition and gardening, as well as educate children on their rights to help prevent abuse.

Valdez's charity has helped 10,000 children in Cavite over the past six years, according to the judging committee of the International Children's Peace Prize, which was founded by Dutch organisation KidsRights.

"Kesz is like any other normal kid. But his achievements, and the number of people he has helped, surpass those of most adults," Manalaysay said.

Valdez's plans for the immediate future are to continue with his charity, while making sure his school work does not suffer from his busy schedule.

Eventually, he wants to work in one of the toughest jobs of all, while expanding his charity work.

"I'm studying hard because I want to be a doctor... I want to help more children, not only in the Philippines, but also in other countries," he said.

Thousands of Catholics were led by Philippine nuns and priests in a protest in Manila against a proposed law that would provide free contraceptives in a bid to curb population growth.
Advertisement
<< Nail-biting may be Included as a Symptom of Obsessive Compu...
Tight Race In South Korea's Presidential Election >>