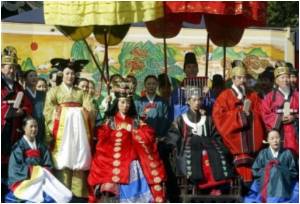 In South Korea it is an issue preoccupying the three main candidates in December's presidential election, as they seek any advantage in what is looking like an increasingly tight race. The rapidly ageing population is redrawing the electoral landscape of a country where half a century of tumultuous change has honed sharp generational divides.

The pronounced demographic shift triggered by a plummeting birth rate and soaring life expectancy is seen as one of the greatest challenges facing Asia's fourth largest economy in the future.

The South Korean government has decided to designate the southeastern city of Gumi as a special disaster zone, as the area is affected by a toxic chemical leak.
Advertisement

In the shorter term, it is an issue preoccupying the three main candidates in December's presidential election, as they seek any advantage in what is looking like an increasingly tight race.


As is the general rule of thumb in most democracies, younger Korean voters lean towards the liberal side of the political spectrum while older voters are seen as more conservative.

South Korean authorities revealed that they will be spending over half a million dollars on the construction of floating toilets around shellfish farms.
Advertisement
Where South Korea stands out, is in the dramatic shift in the size of these electoral blocs.

Voters aged below 40 make up 38 percent of eligible voters this year -- a sharp drop from 48 percent a decade ago when they helped liberal candidate Roh Moo-Hyun to the presidential Blue House.

At the same time, the segment of voters aged 50 to 69 has grown from 30 percent to 40 percent of the total electorate.

"Demographically speaking, this is a favorable change for the conservatives," Jeong Han-Wool, analyst at the East Asia Institute, told AFP.

A recent poll by Gallup Korea showed about 60 percent of voters aged 50 to 69 support Park, with the added bonus that older voters traditionally turn out in greater numbers on polling day than their younger counterparts.

Young voters generally cast their ballots late and both Moon and Ahn have sought to level the playing field by demanding that polling booths be kept open for several hours beyond the existing 6:00 pm deadline.

Moon argued that millions of temporary workers on shift work would be unable to cast their votes, while Ahn called the current 6:00 am to 6:00 pm voting window outdated, saying it should be revised "immediately".

Park's campaign team has rejected the proposal, saying the December 19 polling day was too close for such a significant alteration which, it added, could only be implemented at substantial financial cost.

A change in the voting schedule would require parliamentary approval -- impossible without the support of Park's ruling party.

"Longer voting hours would definitely benefit the liberals, while the conservatives have little to gain and, potentially, a great deal to lose," said Yoon Hee-Woong, senior analyst at Korea Society Opinion Institute.

The campaign for the December election is increasingly being dominated by the question of whether Moon and Ahn -- widely seen as splitting the liberal vote -- will join hands and field a unified candidate to challenge Park.

The latest polls show Park winning easily in any three-horse race, but neck-and-neck with either of her rivals if the field is narrowed to just two candidates.

While generational divides are common to all societies, they are particularly pronounced in South Korea, given the economic, political and social transformations it has experienced since the 1950-53 Korean War.

Depending on their age, the current electorate either grew up in a third world state, a developing country under military dictatorship, or a vibrant, prosperous democracy.

"In terms of economic development and democratisation, we've achieved in six decades something that took several hundred years in other countries," said the East Asia Institute's Jeong.

"There were so many intense conflicts and disputes among generations and social groups in the process and some of those wounds have yet to be healed," he said.

Observers say the key electoral demographic for December's poll is made up of voters in their 40s who fall between the other two main blocs.

While many spent their college years protesting against the military dictatorship of Park's father, they have -- as they aged and became parents -- become more conservative on issues like national security and social stability.

Polls suggest they are still more likely to vote for a liberal candidate, but close to 40 percent would vote for Park in a two-horse race.

It was this particular demographic that Park was seen as targetting when she bit an extremely sensitive bullet and publicly apologised to relatives of victims of her father's autocratic, repressive rule.

"Park knows that her victory is not guaranteed if she fails to get enough votes in this age group," said Kim Neung-Gou, the head of the political news and consulting firm Polinews.

US FDA Warns Against Using Seafood From South Korea

Xenophobia
News Archive
News Resource
Advertisement
News Category
How to Reduce Needle Anxiety in Children? Tobacco Addiction: Here's How to Break the Habit Parents are 'Winging It' on Their Kids' Mobile Use Ankle and Ankle Movements While Riding an Hoverboard Is It Healthy to Let Your Mind Wander?
More News
Sign up for Wellness Consult a Doctor Sign up for Selfcare

Iron Intake Calculator Find a Doctor The Essence of Yoga Post-Nasal Drip Pregnancy Confirmation Calculator Hearing Loss Calculator Noscaphene (Noscapine) Blood Pressure Calculator Loram (2 mg) (Lorazepam) Calculate Ideal Weight for Infants
This site uses cookies to deliver our services. By using our site, you acknowledge that you have read and understand our Cookie Policy, Privacy Policy, and our Terms of Use