Patients With Type 2 Diabetes or Hypertension Must be Evaluated for Sleep Apnea: American Academy Of Sleep Medicine

Anyone with Type 2 diabetes or hypertension is being advised by the American Academy of Sleep Medicine (AASM) to be evaluated for sleep apnea by a board-certified sleep medicine physician. The recommendation comes as the group of international clinicians and researchers meets in Baltimore for SLEEP 2013, the foremost gathering of sleep experts annually.

Overwhelming clinical evidence has shown that patients suffering from two very common illnesses - Type 2 diabetes and hypertension - are at much higher risk for obstructive sleep apnea (OSA), a dangerous condition characterized by episodes of complete or partial airway obstruction during sleep. Research also has shown that treating sleep apnea can help in the management of these two disorders.

"Type 2 diabetics and people with hypertension are much more likely to have obstructive sleep apnea than other people, and as a result should immediately discuss their risk for sleep apnea with a sleep specialist," said M. Safwan Badr, MD, president of AASM. "Diagnosis and treatment of sleep apnea from a board-certified sleep medicine physician will promote improvement in these conditions - including improved insulin sensitivity, blood pressure and cholesterol."


Type 2 Diabetes and Obstructive Sleep Apnea According to the Centers for Disease Control and Prevention, 25.6 million Americans aged 20 years or older suffer from diabetes, and Type 2 diabetes accounts for about 90 to 95 percent of all diagnosed cases. Seven in 10 people with Type 2 diabetes also have obstructive sleep apnea, and the severity of the sleep disorder directly impacts diabetes symptoms; the more severe a diabetic's untreated sleep apnea, the poorer their glucose control.

A recent study from the University of Chicago shows that continuous positive airway pressure (CPAP) treatment of sleep apnea may have as much of an effect as prescribed oral diabetes medications.

"In our study, one week of optimal CPAP use lowered average 24-hour glucose levels and improved post-breakfast glucose response in Type 2 diabetics with obstructive sleep apnea," said Esra Tasali, MD, lead author of the study and assistant professor of medicine, pulmonary and critical care medicine at the University of Chicago Department of Medicine. "The dawn phenomenon, an early-morning increase in blood sugar in people who have Type 2 diabetes, also was reduced by 45 percent as a result of CPAP therapy." 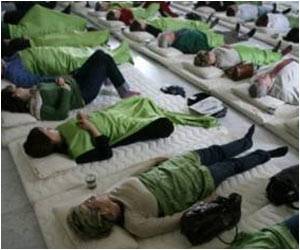 In Sleep Apnea Patients, Stress Test may Help Predict Increased Mortality Risk
Studies have shown that people who suffer from obstructive sleep apnea (OSA) - a disorder that causes breathing to halt intermittently during sleep - have a higher mortality rate than those who do not have the disorder.
READ MORE