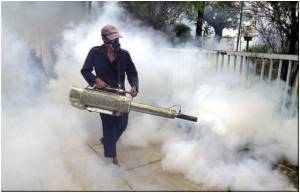 Researchers have found that genetic mutations and exposure to insecticides in workplaces interact to increase the risk of Parkinson's disease, especially in men.

"In most cases, the etiology of Parkinson's disease is likely to be multifactorial, and environmental factors as well as their interaction with susceptibility genes are considered to contribute to the disease," the authors wrote.

Scientists May Have The Answer To Parkinsons

Men exposed to certain pesticides, including organochlorines such as DDT, have been shown to develop Parkinson's disease through damage to neurons that produce the neurotransmitter dopamine.


"Genetic polymorphisms of xenobiotic [compounds not naturally found in the body] metabolizing enzymes may act as susceptibility factors," they added.

A French Parkinson's sufferer who turned into a gambler and thief, with compulsive homosexual urges thanks to the drugs he took, is all set to receive a huge compensation.
Advertisement
The gene ABCB1 may encode the production of compounds essential to this process. In a study of 207 individuals with Parkinson's disease classified as never users, users for gardening and professional users of pesticides, the researchers found that the relationship between organochlorine insecticide exposure and Parkinson's disease was approximately 3.5 times stronger in men who carried two variant alleles (gene copies) compared with those who were not carriers.

"Based on a biological hypothesis, we show that organochlorine insecticides may interact with ABCB1 in determining the risk of Parkinson's disease," the authors conclude.

"These findings support the hypothesis of gene x pesticide interactions in Parkinson's disease."

The findings are published in the June issue of Archives of Neurology, one of the JAMA/Archives journals.