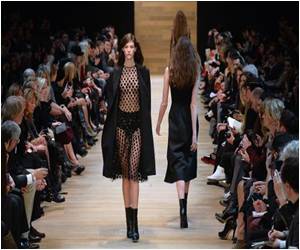 Paris fashion went on a journey through history with a haute couture collection by Christian Dior designer Raf Simons, in which Edwardian coats and bodices met flapper dresses and space suits.

A-listers Sean Penn, girlfriend Charlize Theron and Marion Cotillard were among those on the front row of the show, held in Paris's Rodin Museum.

Always a highlight of Paris fashion, guests arriving for the show were invited to walk along a pale grey carpet laid down the centre of the museum's rose garden lined by manicured lawns.


At the end, a white, circular building looked a bit like a spacecraft ready for take-off. A small door led inside to a mirror-lined room with walls covered floor-to-ceiling in white flowers.
Advertisement
For Simons' fifth season since taking over in the wake of flamboyant John Galliano's sacking, the Belgian designer said he went in search of modernity: looking back in order to look forward.

"I was interested in the process of finding something extremely modern through something very historical," he said.

"What I was attracted to was... how the foundations of one era are based on another, how the future is based on the past."

Along with Dior's own archive of designs, the collection was also influenced by 18th-century "court coats", big skirts and 1920s loose flapper dresses.

"It felt more modern to go to the far past, not the 'modernized' look of the last decade," he added.

The result was embroidered silk jumpsuits, wool coats with rounded shoulders and over-sized cape-like collars and jackets with pleated backs.

Simons kept mostly to a palette of pale green, pink, off-white, black and navy. But there were bold colours too, such as an electric-blue embroidered silk dress and a bright-red wool jacket.

Simons' has repeatedly focused on the theme of modernity in recent collections.

His collection from last July, featuring multicultural influences such as African beading, was described as a step away from the fashion house's characteristic French style.

Earlier this year, Simons spoke of not wanting to "force a look" on women and of making sure they could wear his clothes and still kick off their heels and go dancing.

Haute couture had become "something women were watching... as a spectacle, the way you go to the theatre", he said, adding that he wanted to reconnect it "more with the way of living".

Worn exclusively by the world's richest women, haute couture exists only in Paris.

It is a legally protected appellation subject to strict criteria, such as the amount of work carried out by hand, the limited number of pieces and the size of a house's workforce.

Around 30 haute couture collections for autumn/winter 2014/15 will be shown in Paris over the next week, before wrapping up on Friday.

Raf Simons' Jailbirds Kick Off Paris Fashion
Designer Raf Simons intends to make his audience work for his art and kicked off five days of Paris ...