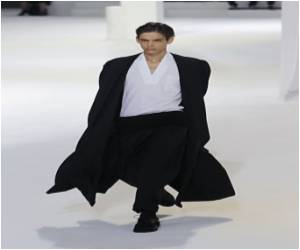 Designer Raf Simons intends to make his audience work for his art and kicked off five days of Paris men's fashion with his collection.

Last year the Belgian designer -- who as well as having his own label is also artistic director at Dior -- bussed several hundred photographers, journalists and buyers out to a distant Parisian suburb.

This year, he opted for the smart Place Vendome, but sent out e-mails a few hours before effectively warning invitees it was not likely to be a comfortable experience.


"Please note Raf Simons has decided to show his spring/summer 2015 collection in front of a standing audience," the message said.

Photographers and Smartphone users were also informed that Simons would be using "specific lighting which does not tolerate flash photography".
Advertisement
"Therefore we ask you to please turn off the flash setting on your cameras and phones," the e-mail added.

Arriving at the show, invitees found themselves ushered into a large space with hundreds of people milling around, fanning themselves with their invitations, as if at a party without any drinks, canapes or air conditioning.

Simons kept his audience waiting 35 minutes before dimming the lights to an eerie red glow and sending out a collection that looked as if it was inspired by prison uniforms.

There was no such austerity at fellow Belgian Walter Van Beirendonck's colourful and eccentric "Whambam!" show, although an ability to suspend disbelief would have been useful.

Embroidered tail coats with pieces cut out and others left dangling from the back were teamed with wide cropped trousers, coloured sashes and big sandals.

Elsewhere, French designer Christophe Lemaire brought the fashion crowd back down to earth with a collection that was all about stylish workwear from big, breezy linen-cotton parkas to tapered trousers and shirt-jackets.

The famously gimmick-free Lemaire, who is also creative director of womenswear at Hermes, told AFP there was "nothing artificial, no concept -- just clothes".

"It's very much about workwear, work ethics, but trying to find this balance between functionality, elegance, ease and lightness," he told AFP backstage.

"It was sporty but still sophisticated, I hope," he said, adding that the suits had a "soft Japanese 1980s feeling".

"Beautiful, soft, wool gabardine suiting. Casual suits that are between shirts and jackets," he said.

They will be followed by six days of haute couture collections for autumn/winter 2014/15 from July 6 to 11.

Macho Sporty or Retro Classic? Mens Styles for Winter Season
Italy's top designers are cannily proposing a wide range of men's styles for next winter, from ......