Paralysed People can Play Music Just by Thinking About It! 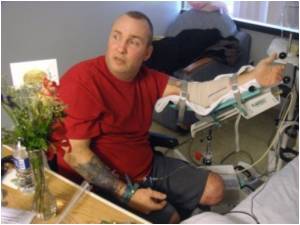 A successful trial of a brain-computer interface may soon make it possible for paralysed patients to play music with brainpower alone.

In the trial, a pianist played a series of notes, and the woman echoed them on a computerized music system. The woman then played a simple improvised melody over a looped backing track. But the woman was paralysed after a stroke, and can make only eye, facial and slight head movements, reports Nature.

A procedure involving only one small incision and no major modifications appears helpful in reanimating the lower face after paralysis, says a new study.
Advertisement


It should eventually help people with severe physical disabilities, caused by brain or spinal cord injuries to make music for recreational or therapeutic purposes.

Diamond implants inside the body can cure paralysis.
Advertisement
Miranda and his colleagues have used one of the oldest of these systems: electroencephalography (EEG), in which electrodes on the skull pick up faint neural signals.

The EEG signal can be processed quickly, allowing fast response times, and the instrument is cheaper and more portable than brain-scanning techniques such as magnetic resonance imaging and positron-emission tomography.

Previous efforts using BCIs have focused on moving computer screen icons such as cursors, but Miranda's team sought to achieve the much more complex task of enabling users to play and compose music.

Miranda said that he first became aware of the then-emerging field of BCIs more than a decade ago while researching how to make music using brainwaves.

The trick is to teach the user how to associate particular brain signals with specific tasks by presenting a repeating stimulus - auditory, visual or tactile - and getting the user to focus on it. This elicits a distinctive, detectable pattern in the EEG signal.

Miranda and his colleagues showed several flashing 'buttons' on a computer screen, which each trigger a musical event. The users push a button just by directing their attention to it.

With a little practice, this allowed users to create a melody as if they were selecting keys on a piano. And, as with learning an instrument, say the researchers, "the more one practices the better one becomes".

The findings have been published in the journal Music and Medicine1.

New technology that would soon allow paralysed patients to operate bionic limbs with the aid of implanted brain transmitters is being developed by Brit engineers.
Advertisement
Advertisement