Pakistan Looks At India For Tips To Fight Polio 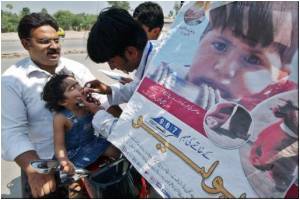 After the remarkable progress India made during the past one year with no polio cases, WHO officially removed India from the polio-endemic countries list.

Pakistan is now following India's footprints to rid the country of polio. Pakistan's battle against polio has been marred by conflicts, natural disasters and lack of accountability over the past year.

According to Unicef, Pakistan registered 198 cases of polio in 2011, rising from 144 cases in 2010. Over the last two months, the country has reported nine cases of polio.


"In the previous plan against polio, war and floods have been the biggest roadblocks for immunization and campaigning. We faced serious issues in accessibility in provinces where war is on and people, fearing the military, close their doors when immunization volunteers or health volunteers arrive," Aziz Memon, national chairman of the Pakistan Polio Plus committee, told IANS.

Global polio eradication programs have significantly cut the incidence of the disease, yet it is an apt time to take stock of what remains to be done to 'Stop Polio Forever'.
Advertisement
"We have groups of Taliban, Pakistan Army, the US - all concentrating on a region. How to tell each one of them how badly it is affecting the polio drive and the lives of children in those regions?" Memon said, adding that Balochistan alone reported 72 cases last year.

Memon said a team exchange is likely between India and Pakistan.

"We have been exchanging notes. But a delegation exchange is likely in the months to come after an approval from the government," Memon said. Pakistan will also be pitching in at the polio booths at Attari and Wagah where India is taking preventive measures for polio import.

"However, to eradicate polio, we need a good watchdog in Pakistan. India had a wonderful role played by Unicef and WHO. We hope to see the same support from these agencies in Pakistan," he concluded.

"Where we are facing difficulty is in translating the government's commitment to the local, sub-district level -- union councils in the Pakistani administrative system. But there are many lessons from India for Pakistan, and the people of both countries are eager to share those lessons," Bari told IANS on e-mail.

Massive floods in 2010 affected regions of central Pakistan, while Pakistan has also been grappling with implementing vaccination drives in war-affected Quetta in Balochistan and the districts of Khyber Pakhtunkhwa province that share the border with Afghanistan.

Representatives from Pakistan's Polio Plus committee, headquartered in Karachi, and the Pakistan government were in the Indian capital for a two-day polio summit organised by the ministry of health and family welfare and Rotary International.

After the failure of the polio emergency plan of 2011, Pakistan now plans to take forward its augmented national emergency action plan (NEAP) to fight the disease. NEAP 2011 failed to create an impact, after which a revised NEAP was launched last month.

The re-designed emergency plan for polio promises a stronger crackdown by tackling internal migration and tracking children in conflict-hit regions.

"In the previous emergency plans, there was no clarity on the roles of certain officers. It is not possible to eradicate the disease while sitting in AC chambers and not knowing what is going on in the field," Memon said on the dismal picture after NEAP 2011.

The immunization drive is expected to intensify in the turmoil-hit regions as military and religious heads will be involved in door-to-door campaigns.

According to official statistics from Pakistan's federal ministry of health, nearly three out of every four cases were reported from the conflict-affected parts of the Pakistan-Afghanistan border.

Experts say Karachi remains a polio pool as the metropolitan is at a high risk of receiving the virus due to high migration from other regions. Sindh reports nearly 25 cases every year.

"Sindh in Karachi has been a potent polio importer. The polio programs have not yet covered transit points where more than law and order, migration and awareness are a problem," Masood Ahmed Bhalli, chief coordinator of field activity in Sindh, Pakistan Polio Plus committee, told IANS.

After registering a zero-polio period in the last one year, India was taken off the list of polio-endemic countries by global health body WHO Saturday. Afghanistan, Pakistan, Nigeria are now the three endemic countries where the disease remains.

Hypermobility Syndrome
News Archive
News Resource
Advertisement
News Category
Milestone In Voluntary Blood Donation Achieved Samsung Reinvents Toilet for the Poor Which is a Better Form of Exercise: Daily or Weekly? First Phase of Foot-and-Mouth Disease Vaccination Shocking News: Polio Cases Return After a Decade in the US
More News
Sign up for Wellness Consult a Doctor Sign up for Selfcare