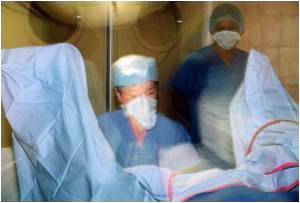 A study has revealed some dramatic findings from a 10-year initiative called the "No Pain Labor N' Delivery China Mission."

Childbirth is one of the most marvelous and memorable segment in a woman's life that calls for celebration. Knowledge about labor and delivery can ease unnecessary fear, ensuring a unique experience.
Advertisement

Medindia offers you a useful calculator to find out if you fall under the high risk pregnant group. Take the precautionary steps and avoid complications during pregnancy.
Advertisement
The vast majority of women in China do not have the option of pain relief during labor. The country also has the highest overall Cesarean delivery rate in the world and the highest rate by maternal request (no medical indication). Although Chinese women express concern about the safety of vaginal delivery and the pain associated with it, Cesarean delivery (in both first and third-world countries) is associated with higher rates of maternal death and severe complications.

"It has been a dream for Chinese women to give birth without pain and without compromising safety," said Dr. Hu. "Common questions on Chinese childbirth websites include: Where can I get labor pain relief? Which pain relief method is the best? and Is pain relief medication safe for my baby?"

Using the No Pain Labor system, the Shijiazhuan Gynecology and Obstetrics Hospital near Beijing initiated a labor epidural service and experienced dramatic results in the first six months. Before the study, none of the women took pain relief medication, and around 50 percent had Cesarean delivery. After six months, epidural analgesia was chosen by more than half of the women, even though 100 percent of the cost was assumed by the patient. Also, the monthly birth rate in the hospital went from 747 to 1,046, despite the fact that women in the community have a choice of several hospitals and two-thirds of area births take place in other facilities.

"Our mission reinforces the concept that providing epidural analgesia is more than just the procedure itself," said Dr. Hu. "Provision of obstetric anesthesia care includes providing 24/7 anesthesia support for women undergoing both vaginal and Cesarean delivery and their children. The mission continues to expand its scope by visiting new Chinese hospitals every year and we hope that our contributions will improve the health of mothers and babies, first in China, and then elsewhere."

Every year, approximately eight million children and more than 350,000 women die of preventable causes related to pregnancy and childbirth. The World Health Organization Millennium Development Goal Five aims to improve women's health by decreasing the maternal mortality ratio by 75 percent between 1990 and 2015.

Pregnancy is a time when a female blossoms into a woman with an experience never felt before. Here are a few self-care tips for pregnant mothers that will help them during their pregnancy.
Advertisement
<< Modernity Is Entering Nepal
Measuring How Sleepy You are >>