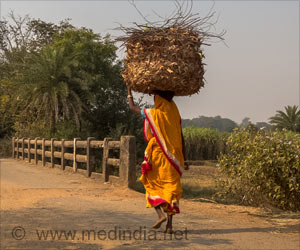 This year's percentage is higher as compared to around 38 percent in December 2013. Tomar said around three crore toilets have been built across the nation since October 2, 2014, when Prime Minister Narendra Modi's flagship programme Swachh Bharat Mission was announced.

In Malda district all school inspectors and teachers monitor whether toilets are functional and whether they are being used with the help of this mobile app.
Advertisement
‘Still 450 million people defecate in open areas and to change that, the new "developmental" collaboration between Tata Trusts and the government will play an instrumental role.’

"In terms of villages, 1.3 lakh of them have become open defecation-free, around 70 districts across the nation," he said. Tomar's remarks came after he launched Zila Swachh Bharat Prerak (ZSBP) initiative under the Swachh Bharat Mission-Gramin here.


The Minister said ever since Prime Minister Narendra Modi took the issue of sanitation on priority basis, the Swachh Bharat Mission has taken the form of a movement. "Today, there is a healthy competition among villages, districts and states to become open defecation free. However, to sustain this movement, we need behavioural changes as well," he said.

The Delhi government has called for a meeting with officials of the Delhi Development Authority to ensure an end to the agitation by sanitation workers.
Advertisement
Under the ZSBP initiative, the Ministry of Drinking Water and Sanitation in partnership with the Tata Trusts has decided to offer a cadre of skilled young professionals to work as Zila Swachh Bharat Preraks in each district across the country.

The role of these young 'preraks' will be to support the district officials to implement Swachh Bharat Mission-Gramin by coordinating various activities. Chairman of Tata Trusts Ratan Tata said he was keen to work on child nutrition after his retirement and took a leap of faith to work with the government on this initiative.

"Usually, the corporates look at the government with suspicion and vice versa. But we wanted to prove that perception wrong," he said. He added the new initiative would have a huge impact on "the India of tomorrow".

Niti Ayog CEO Amitabh Kant said while the government is good at certain things like policy making, it can be "disastrous" at others like on-ground implementation. "I feel this collaboration will be a gamechanger at the grassroots level," he said.

Drinking Water and Sanitation Secretary Parameswaran Iyer said it would not only engage smart minds in the Swachh Bharat Mission, but also ensure a structured integration of youth in the programme and bring fresh ideas, energy and enthusiasm.

He added there were still 450 million people left who still defecate in open areas and to change that, this new "developmental" collaboration between Tata Trusts and the government will play an instrumental role.

Women and Child Development Secretary Leena Nair added that just building toilets was not enough. "We need to create a demand for those toilets as well. Just building them will not ensure people will stop open defecation," she said.

Water, Sanitation And Hygiene To Combat Neglected Tropical Disease: WHO

Jenneh Swaray, 20-year-old girl was affected with the deadly disease and had lost nine members of her family to Ebola during its worst outbreak.