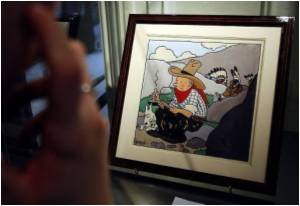 Creating a new record for the auction of a comic strip, an original page of drawings of Tintin has been sold for more than 2 million euros.

The piece, dating from 1937 and signed by the creator Herge, went to an American collector after 15 minutes of furious bidding at the Artcurial auction in Paris.

Editing of Mohammed Cartoons Raises Hackles in US

By deciding not to reprint the 12 sketches for fear of new violence, editors of a new US book on the controversy over cartoons caricaturing Muslims and the Prophet Mohammed have triggered a storm.
Advertisement

Experts said the sum, 2.5 million euros ($3.4 million) including fees, or 2.1 million euros without, reflects the new enthusiasm for cartoon items, which have seen prices soar in a decade.


The piece sold Saturday is a double page ink drawing created by the Belgian artist for the inside cover of the Tintin adventures published between 1937 and 1958, featuring images drawn from the various albums.

Soviet-Era Cartoons: A Blast from the Past

With the fall of the eastern communist bloc, cartoons vanished from Cuban TV for more than two decades, quirky Soviet-era cartoons are fueling a wave of nostalgia for middle-aged Cubans.
Advertisement
Tintin appears with his dog Snowy in different situations, as a cowboy, an explorer, a knight in shining armour, on a horse or in the desert.

The previously highest-selling comic piece, also by Herge -- the cover for "Tintin in America" created in 1932 -- sold for 1.3 million euros to a "Tintinophile" last June.

"I thought only these inside cover pages could beat the record set by 'Tintin in America' in 2012. This has happened today with this exceptional drawing," said Artcurial's cartoon expert Eric Leroy.

"This new world record confirms the place of cartoon art as a major art form," he said.

The gallery owner Daniel Maghen, who also works with comic art, estimates that prices for cartoon art have multiplied tenfold in the last 10 years.

The sale on Saturday was entirely dedicated to the Belgian designer and his blonde-haired creation. A further sale, featuring the work of other cartoonists, will take place Sunday.

A linguist with 20 years experience teaching students the intricate concepts about the science of language using jokes, puns and cartoons, employed the same approach in his new book.
Advertisement
<< Worlds First Golf Course to Gain Royal Patronage is Now T...
Struggle for Disabled Indians Highlighted by Case of Boy Ti... >>