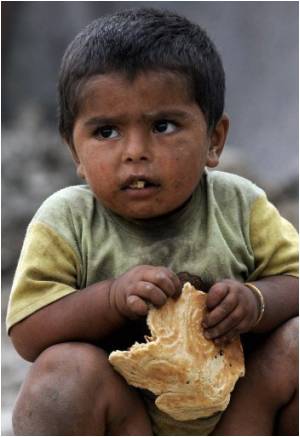 One third of food produced worldwide is wasted costing around the world economy around $750 billion a year, reveals UN report.

The Rome-based Food and Agriculture Organisation (FAO) said some 1.3 billion tonnes of food are wasted every year, with the Asia region including China seen as the worst culprit.

The food agency's director general, Jose Graziano da Silva, told a press conference that in total, "one third of the food produced today is lost or wasted... equivalent to the Gross Domestic Production (GDP) of Switzerland."


"We simply cannot allow one-third of all the food we produce to go to waste or be lost because of inappropriate practices, when 870 million people go hungry every day," he added.
Advertisement
Achim Steiner, head of the United Nation's Environment Programme (UNEP), described it as "a staggering phenomenon."

"This is a big wake up call. We may not even have captured many of the more indirect impacts of food waste... and the costs which will be born by our children and grandchildren," he told the joint press-conference.

"It will take less than 37 years to add another two billion people to the global population. How on earth will we feed ourselves in the future?" he asked.

Steiner said that eliminating food wastage had "enormous potential" to reduce hunger and called on citizens to take individual action to tackle the issue.

"Each one of us has a role to play. Starting with the ridiculous phenomenon in wealthy countries of not buying crooked vegetables any more," he said, adding that over-zealous observation of sell-by dates was also leading to huge quantities of food being thrown away.

High-income countries waste during the food consumption phase, while developing countries are losing food during production, the FAO said.

Each year, food that is produced but not eaten "guzzles up a volume of water equivalent to the annual flow of Russia's Volga River and is responsible for adding 3.3 billion tonnes of greenhouse gases to the planet's atmosphere," it said.

The report fingered Asia in particular, saying that over 100 kilos (221 pounds) in vegetables per capita are wasted every year on average in "Industrialised Asia", a region including China, Japan and South Korea.

It estimated that the region also wastes 80 kilos of cereals -- mainly rice -- per person, warning that rice cultivation was also high-intensity in carbon and had emerged as "a significant environmental hotspot".

Wastage of vegetables in Asia occurred "during agricultural production, post-harvest handling and storage, and consumption phases," the FAO said.

Other key areas identified in the report in terms of waste and environmental impact were the meat industry in North America and Latin America, as well as fruit wastage in Asia, Europe and Latin America.

Produced but uneaten food occupies 30 percent of the world's farmland, the report said.

"Food wastage reduction would not only avoid pressure on scarce natural resources but also decrease the need to raise food production" to meet the demands of a fast-growing world population, it said.

Advice on how to reduce food waste ranged from planning shopping trips in advance and not overbuying, to "donating extra food to feed vulnerable members of society" and using food no longer fit for human consumption for livestock feed.

The food agency also stressed the importance of recycling unusable food, "with energy recovery allowing energy and nutrients to be recovered from food waste, representing a significant advantage over dumping it in landfills."

"Uneaten food that ends up rotting in landfills is a large producer of methane, a particularly harmful greenhouse gas," it said.

Source: AFP
Advertisement
<< Kathleen Sebelius  US Health Secretary Speaks for Affordab...
Watch Out for Signs of Eating Disorder in Teens Who Trim Do... >>

Total Food Wasted By the West Can Feed The World's Starving Seven Times Over
A new book has determined that the waste in the UK, Europe and the US would be enough to feed the ...

Reducing Food Waste Key to Feeding Billions More Worldwide: Expert
An expert has said that families can be key players in a revolution needed to feed the world, and ....