One-Third of Brit Families Argue With Neighbours Over Garbage Disposal 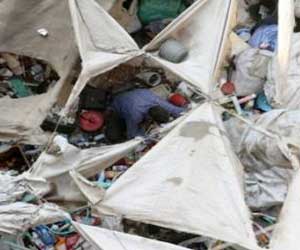 More than one in three Brit families have fallen out with their neighbors for a not-so-trashy reason - waste management.

It found 35 per cent of households pointed to bins or rubbish as a cause of disputes, but the study also found that the public is prepared to admit its own bin record is far from clean.

More and more people in Europe are struggling to cope with noises coming out of their neighbours house, a new survey reveals.
Advertisement

While one in four admitted to putting some of their waste into a neighbour's bin because theirs was too full, one in five admitted putting their rubbish out days before it was due to be collected just to get it out of the house.


"There's nothing worse than living next door to someone who has overflowing and smelly bins, which you can smell from your garden," the Daily Mail quoted Jo Gosden, a spokeswoman for Bin Buddy, which carried out the study of 3,000 homeowners, as saying.

New research is to assess if designing walk-friendly neighbourhoods can really encourage people to walk more and ditch the car.
Advertisement
"But rather than having a weekly argument every bin day with your neighbour, try and have a quiet conversation with them to see if they do something to tidy up the rubbish near your home," added Gosden.

And here are some of the triggers for rubbish rows:

5. Neighbours putting their rubbish in your bins

8. Bins being left out for days before they are due to be collected

10. Neighbours filling up communal bins with their rubbish

After a keen observation, two Indiana University professors have found that the more alcohol sales sites in a neighbourhood, the more violence occur in premises surrounding it.
Advertisement
Advertisement
This site uses cookies to deliver our services.By using our site, you acknowledge that you have read and understand our Cookie Policy, Privacy Policy, and our Terms of Use  Ok, Got it. Close
×