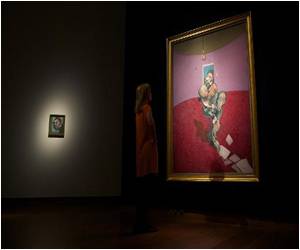 An oil painting sold over two decades ago for around 150 euros ($200) at a Spanish antique shop, has been certified as Salvador Dali's first Surrealist work which he painted as a teenager, art experts said Thursday.

Tomeu L'Amo, a painter and art historian, found the canvas at a store in Girona in northeastern Spain in 1988 and suspecting it was a work by Dali he paid 25,000 pesetas, Spain's currency at the time, for it.

Officials reveal that two oil paintings including one owned by Yale University in the United States have been certified as being the work of Spanish surrealist artist Salvador Dali.
Advertisement

"I was very happy. I felt like a kid in a candy store," he told a news conference in Madrid to discuss the conclusions of art experts who have studied the work.

A portrait depicting artist Francis Bacon depicting his lover and muse George Dyer was sold for over £42 million ($70 million, 51 million euros), setting a record
Advertisement
"The Intrautirine Birth of Salvador Dali", which depicts angels floating in the sky over a volcano, bears the Spanish artist's signature below a short dedication.

It was dismissed for years as the work of an unknown artist because the signature includes the date 1896 -- eight years before Dali was born.

But after subjecting the painting to the latest high-tech tests -- including infrared photography, X-rays and ultraviolet radiation -- between 2004 and 2013 art experts have concluded that it is indeed the work of Dali and was made around 1921 when he was 17-years-old.

The work employs thick brushstrokes with the figures defined by strokes of black and blue pencil, a technique frequently used by Dali, said Carmen Linares, the head of the conservation department at Barcelona's Frederic Mares Museum.

"Infrared photography has improved the visualisation of the black lines thus confirming the use of this technique which is also used in other works by the artist," she said.

Handwriting analysis also concluded that the script used in the ten word dedication in the lower right part of the painting corresponds with Dali's writing style at the time, said Jose Pedro Venzal, a handwriting analyst who was worked for global police body Interpol.

"Writing samples from the dedication and signature coincide with the handwriting and signature which the artist had in the 1920s," he said.

The dedication, which was written in Catalan, also contained a common spelling mistake made by Dali which was corrected so that it is not visible to the naked eye, Venzal added.

Experts also cited as evidence that the painting was made by Dali the fact that he is quoted as saying: "Very young I composed a piece on angels."

L'Amo believes Dali, who had a reputation for making outrageous claims and carrying out media stunts, used numerology to come up with date he put on the painting.

"Dali must be laughing in his grave at the thought that he managed to fool everyone for so many years," he said.

L'Amo said he sold the work earlier this month for an amount which he refused to reveal to a collector who wishes to remain anonymous.

"The painting can be considered the first surrealist work of Dali," said Nicolas Descharnes, a leading Dali expert who has studied the painting.

While the Surrealist movement was not formally founded until 1924 by French writer and poet Andre Breton, the term already existed when Dali made the painting, he added.

Dali died of heart failure in his hometown of Figueres in northeastern Spain in 1989 aged 85.

He remains a controversial artist, loved for his creative genius but regarded by some as little more than a marketing maestro whose media stunts included burying himself in banknotes and signing books wired to a brain monitor.