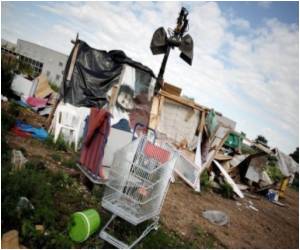 Spain's first "Miss Gypsy", a new pageant aimed at empowering a neglected minority, is being contested by a crowd of girls perched on high heels, in tight, bright dresses.

With flowery shawls and crop-tops for the girls, black waistcoats and gelled hair for the boys, dozens of teenagers auditioned on Friday in the first round of the "Mister and Miss Gypsy" contest.

France has taken a tough stand on curbing illegal Gypsy camps following the warning issued by President Nicolas Sarkozy that some in the community were a risk to security.
Advertisement

"I want to be a model. I love it," said Libertad Barrull, 17, her hair pinned up in an elaborate bun, as she waited excitedly to go before the judges.


Spain's gypsy traditions of flamenco singing and dancing may have a romantic image, but the ancient community of so-called "gitanos" here remains among the most underprivileged, figures show. Gypsies are also known as Roma.

Indonesia's capital city Jakarta will host the finale of a beauty pageant that will be exclusively for Muslim women.
Advertisement
The contest "gives them a helping hand to become something in life, like our generation couldn't be," said Libertad's mother Rosario, 56.

Flocking to a Madrid hotel for the audition, the young contestants posed for photographs and crowded round tables where the organisers noted their names, education, interests and ambitions.

The contest aims to help gypsy women "be a bit more independent", says Maria Jimenez of the Northern Flamenco Association, the organiser of the contest.

"For a gypsy woman, the aim is always just to get married very young, at 14 or 15, and have children," she said.

"I want the gypsy woman to study and become independent so she doesn't depend on her husband to give her 10 euros so she can eat."

The jury -- five non-gypsies from fashion and show business -- is therefore encouraged to judge not just the contestants' looks but their minds.

"It's not just about being pretty," said another of the organisers, Eva Jimenez. "It's about studying and being intelligent."

Half the gypsies in Spain leave school by the age of 16, according to the latest figures from Secretariado Gitano, a rights group, which date to 2011.

"Things have changed a lot" for the gypsies over time, said Rosario's friend, Sonia Heredia, 36.

"People have started to realise now that you can't get married so soon because you're tying yourself down to being a housewife when you're still a child."

The unemployment rate for the 725,000-strong minority is painfully high, however: 36 percent in 2011, according to the rights group. That was way above Spain's already high national rate of 26 percent.

For those hoping to make it to the final of Mister and Miss Gypsy on October 6, the contest is a fun chance to show off -- but these youngsters and their families see the serious side too.

"I hope it can open some doors," said his mother, Esther, 45. "We will see what comes of it. It is a start, but it won't stop the kids getting married the way they do."

Jesus, who works in an ice cream parlour, came along to audition with his cousins.

"I want to be the best-looking," he said. "But I'm also in it to show that we gypsies are people, just like the rest."

The Roma, a traditionally nomadic people whose ancestors left India centuries ago, have long suffered from discrimination.

They were killed in their hundreds of thousands by the Nazis during World War II, alongside Jews and homosexuals.

Discrimination continues today as some countries blame Roma for a rise in petty crime.

Goody Wakes Up to Mysterious Chanting Hammer-Armed Woman at Bedside

Noscaphene (Noscapine) Blood Pressure Calculator Find a Doctor Hearing Loss Calculator A-Z Drug Brands in India Vent Forte (Theophylline) Nutam (400mg) (Piracetam) Accident and Trauma Care The Essence of Yoga Drug Interaction Checker
This site uses cookies to deliver our services. By using our site, you acknowledge that you have read and understand our Cookie Policy, Privacy Policy, and our Terms of Use