NY Rooftops Launchpads for the 'Racehorses of the Sky' 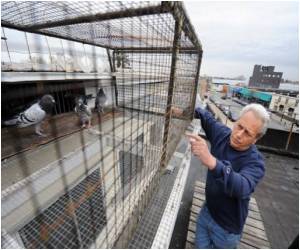 A handful of pigeons circling the drab streets of New York's suburbs gives no idea of the drama being enacted in the skies over the Big Apple this summer.

These are not ordinary pigeons, the flying rats of urban speak. They're homing pigeons, winged racers who'll literally give their lives to cross the finish line.

"They're the racehorses of the sky," as Peter Fusco, a 41-year-old pigeon keeper, from the borough of Staten Island, puts it.


Pigeon racing is little-known, but deeply rooted in New York.

So while the sport may have sharply diminished in popularity over recent years, old-timers and younger enthusiasts like Fusco will ensure that this year's racing season is as fiercely contested as ever.
Advertisement
Keepers, known as fanciers, train their athletes in a game of daring, navigation and endurance. Released hundreds of miles from their home coops, the pigeons brave hawks, storms and deadly power lines to return. Many die.

"They have heart," Fusco said. "I have birds come home with broken feet, busted keel, and they still made it home."

It's a working class sport largely hidden from the outside world. Fanciers maintain coops, called lofts, on rooftops and in yards throughout the less wealthy areas of New York, far from the glitz of billionaire-ville Manhattan.

The city's most famous fancier is Mike Tyson, the legendary heavyweight boxer. He grew up looking after pigeons and has announced he's returning to that first love -- this time as an owner of racing birds.

Albert Sima, who races and sells pigeons from a pet shop in the Queens borough, has known Tyson for years and says the ex-champ is in for a surprise if he thinks money will buy success.

"He's going to find out it's not that easy," Sima, 59, said on the roof where he keeps cages of slick-looking birds.

"This is not boxing. It's completely different. I hope he does well, but I should think I will beat him in most races. If you don't devote the time, you won't be a pigeon racer, just a pigeon keeper."

On race day, various clubs from the city compete, driving hundreds, even thousands of pigeons to a release point anything between 100 and 600 miles from home.

Each pigeon's return to its coop is clocked by a computer chip attached to an ankle ring. Handicaps are then applied to even out the distances between competitors' houses.

Often, only minutes, or seconds separate winners and losers, with prize money varying between a few hundred dollars at local level to tens of thousands of dollars for big occasions.

Ralph Laggio, 71, has been racing pigeons since he was nine and says it takes a lifetime to understand the animals' complexities.

"You need a good bloodline in the pigeon, he said. "You don't just take a pigeon from the street. That to me is nothing but a common pigeon."

Next comes the careful process of training the young pigeon alongside older birds to memorize the neighborhood and gradually acquire the ability to return home from longer distances.

There are various theories on how pigeons home in, battling mortal dangers and simply the temptations of sitting in a tree or absconding with a bunch of street pigeons.

They clearly appear to navigate by the sun and they may also have some natural compass, using magnetic north to find their way across swaths of unfamiliar territory. Once they locate their neighborhood, they seem to recognize the way home.

The real making of champions lies in the care of the pigeon, fanciers say.

"You have to treat them like an athlete. It's like a runner or a boxer: If you don't train, diet, exercise, sleep properly, then you're just wasting your time," Laggio says.

And on race day, the dark arts of the trainer come into play.

Laggio says he'll only feed his birds lightly on the eve of the flight. "That way the pigeon goes into the race, just as if it was a wrestling or boxing match, with a little hunger."

There are even stronger motivators.

Some trainers will fly female pigeons who are sitting on eggs or nursing newly hatched: the mother will be desperate to return home. Others separate males and females from their mates the day before, giving the athlete a different kind of hunger.

"The motivation to get them home, what motivates any individual, you know most of the time --sex!" laughs Staten Island pigeon fancier, Mike Romano.

As youngsters turn to less complex pastimes, Sima fears the sport could die out.

"When I was a kid all me and my father ever talked about was pigeons. There were 50 or 60 members of our club here. Now there're 24," he said.

But nothing, he says, tops that dedication between men -- and it is almost exclusively a male pastime here -- and their feathered friends.

Sima says his passion cost him a normal social life and ultimately his 20-year marriage. He'd change nothing.

"When I'm up here with the birds, I just forget everything," he says.

Tyson, one of the most tortured sportsmen of modern times, will still come into his pet store, "sit with the birds and just watch them."

And the pigeons repay that love.

"A friend had six or seven pigeons that he didn't want anymore, so he gave them to a friend in Florida," Sima recalled. "In a few days, two or three came home. They found their way back -- 1,100 miles back."