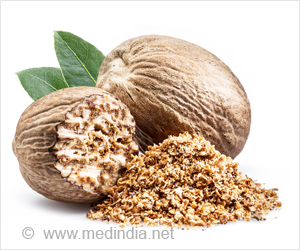 Nutmeg can protect the liver from damage, reports a new study. The findings of the study are reported in ACS' Journal of Proteome Research.

Smelling nutmeg evokes images of fall, pumpkin pie, and hot apple cider. But the spice has been used for years in traditional Chinese medicine to treat gastrointestinal illnesses.

Advertisement
‘Nutmeg is a spice that provides a whole lot of health benefits and used as a remedy to treat gastrointestinal illnesses, asthma, rheumatic pain, toothaches, and infections. The protective role of nutmeg extends by preventing hyperlipidemia, hyperglycemia, heart tissue damage and hepatotoxicity. Myrislignan, a compound present in nutmeg can prevent liver damage.’

According to the Food and Agriculture Organization of the United Nations, the world consumes 9,000 tons of nutmeg annually. Nutmeg is the seed of the Myristica fragrans tree, which is commonly found in Indonesia and has been used to treat asthma, rheumatic pain, toothaches and infections.


In the laboratory, researchers have shown that nutmeg can fight hyperlipidemia, hyperglycemia, heart tissue damage and hepatotoxicity. Inspired by these studies, Xiu-Wei Yang, Frank Gonzalez, Fei Li, and colleagues wanted to see how nutmeg prevents damage to the liver.
Advertisement
The researchers used a mouse animal model of liver toxicity to test the mechanism behind nutmeg's protective effects. Metabolomics analyses showed that nutmeg likely protected against liver damage by restoring the mice to more healthy levels of various lipids and acylcarnitines.

Gene expression studies showed that peroxisome proliferator-activated receptor alpha (PPARα) was modulated by nutmeg, and the spice didn't protect mice from liver injury if the PPARα gene was deleted. In addition, the team found that a specific compound in nutmeg, myrislignan, had a strong protective effect against liver damage.

Liver Damage Possible by Medications, Herbal and Dietary Supplements
An article in the US Pharmacist highlights the possibility of liver damage caused be medications ......

Liver can be Damaged by Cinnamon
Recent researches show that cinnamon is harmful for liver. In olden days cinnamon was not just a ......

Liver Failure
Liver failure occurs when the liver loses its ability to perform its normal functions of regeneratio...