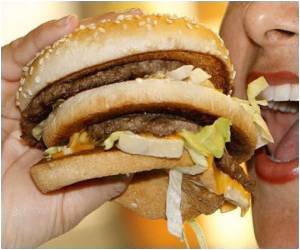 A new blood-vessel-busting burger has been fashioned by an American-themed burger bar in Britain. The burger is so named because of the 5000 calories contained in it.

The burger stands 11 inches high and weighs 2.5lb, and the calorie contained is more than twice a woman's recommended daily intake.

It is made up of two 1lb beef patties, six rashers of bacon, two chicken breasts, two potato waffles, four onion rings, cheese and a tomato, and it is accompanied by a huge ice cream milkshake and chips.


Oscar's Diner, in Telford, Shropshire, is offering the burger as part of its 'Sink the Titanic' challenge.

Customers must eat the entire burger, a large portion of chips, a pot of coleslaw, and then wash it all down with the ice cream milkshake, within 45 minutes.

Read on to become a "pro" in "label reading" and don't get tricked by fancy promotions of food product manufacturing companies.
Advertisement
The winner gets a free meal, a celebratory photograph on the "wall of fame" and a commemorative T-shirt.

The restaurant revealed that of the 100 people who have tried the 15 pounds meal, which takes half an hour to prepare, fewer than 20 have managed every last chip.

"There are many that have tried, but not many have succeeded," the Daily Mail quoted Oscar's deputy manager Nikk Lindop, 26, as saying.

"We've had really good feedback about it and lots of people are coming to try it. Most hit a wall after about 20 minutes and we've had to fail several people who've had just three chips left," he said.

He was asked if critics might say the challenge was encouraging people to eat unhealthily.

"We're not forcing anyone to eat anything. It's just a bit of fun," he stated.

Researchers worldwide have discovered that eating fish regularly is good for health. Regular consumption of fish may reduce the risk of diseases such as asthma, prostate cancer and eyesight.
Advertisement
Advertisement
This site uses cookies to deliver our services.By using our site, you acknowledge that you have read and understand our Cookie Policy, Privacy Policy, and our Terms of Use  Ok, Got it. Close
×