Expert Warns of a Chocolate Drought in 2014 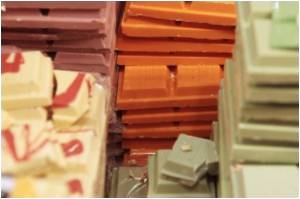 An expert has warned that the world is facing a chocolate drought.

The warning is prompted by fears that the world's supply of sustainable cocoa could run out by 2014.

Chocolate may be Able to Actually Reduce Painful Senstations

A study published Wednesday in the Journal of Neuroscience has found that chocolate activates a part of the brain that blunts pain and makes it difficult to stop eating.
Advertisement

Political unrest in the Ivory Coast, where 40 per cent of the world's cocoa beans are grown, has 'significantly' depleted the number of certified fair trade cocoa farmers.


Many have fled the West -African country, while fair trade training programmes have also come to a halt.

The situation is already affecting chocolate manufacturers, who are facing the highest cocoa prices for over 30 years.
Advertisement
Prices jumped by 10 per cent this month alone. Analysts are predicting they could soon hit 3,720 dollars per metric tonne-a level last seen in January 1979.

Angus Kennedy, the editor of Kennedy's Confection and a leading British chocolatier, said chocolate producers are facing "one of the biggest challenges to hit the industry in recent history."

"Supplies of sustainable cocoa are set to run out, it's that simple," the Daily Mail quoted him as saying.

"The Ivory Coast is a complete no-go area for cocoa traders as it's too dangerous, so training new farmers and trying to cut problems in the region is now, mostly impossible.

"So in effect, its sustainability is not sustainable. Prices can't go up as it's reported because there basically isn't enough certified cocoa left to sell," he said.

Even if the political situation improves, it could take three years or more for the number of certified fair-trade farmers to reach its former level.

According to Kennedy, manufacturers are now fighting for the rest of the world's sustainable cocoa bean stock.

More News on:
Caffeine and Decaffeination Food Combinations that Affect Your Well-being Dark Chocolate vs. Milk Chocolate vs. White Chocolate Foods to Avoid to Keep Acid Reflux At Bay