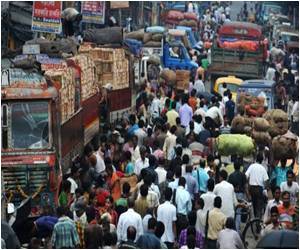 In urban areas with migratory populations, the images can indicate where people are clustering by capturing the expansion and increasing brightness of lighted areas. The researchers found the technique accurately indicates fluctuations in population density  and thus the risk of epidemic  that can elude current methods of monitoring outbreaks.

The team used nighttime images of the three largest cities in the West African nation of Niger to correlate seasonal population growth with the onset of measles epidemics during the country's dry season, roughly from September to May. The images, taken between 2000 and 2004 by a U.S. Department of Defense satellite used to obtain night-light data, were compared to records from Niger's Ministry of Health of measles cases from the same years. The team found that measles cases were most prevalent when a city's lighted area was largest and brightest.


Lead author Nita Bharti, a Princeton University postdoctoral researcher in the Department of Ecology and Evolutionary Biology and the Woodrow Wilson School of Public and International Affairs,  explained that people in nations such as Niger commonly migrate from rural to urban areas after the growing season. As people gather in cities during the dry-season months when agricultural work is unavailable, these urban centers frequently become host to outbreaks of crowd-dependent diseases such as measles and meningitis.

Online data of over 5,450 hospitals from both private and public sectors that can be searched by name, city, state or pincode
Advertisement
Migratory populations are notoriously difficult to track, Bharti said, which can amplify the difficulty and complexity of carrying out large-scale vaccinations. She and her co-authors found, however, that monitoring changes in nighttime lights clearly indicates where and when a population is expanding and where an epidemic would most likely occur.

"Once you establish the patterns of epidemics, you can adjust your intervention strategy," Bharti said. "We turned to this technique because there is really no other way to get any idea of how populations are changing in a place like Niger. That's true throughout most of sub-Saharan Africa and a lot of other places in the world.

"This method isn't limited to understanding measles  think about malaria or meningitis," Bharti said. "These diseases are geographically specific, for the most part, to areas where this would be a useful technique. These are places that are not so industrialized that they will always be saturated with brightness and where there may be some level of agricultural dependence so that there are detectable labor migrations."

Deborah Balk, a professor at the City University of New York and associate director of the university's Institute for Demographic Research, said the researchers' use of city-scale nighttime-lights imagery to examine the spread of disease is "pathbreaking" and offers significant advantages over more common techniques.

Pej Rohani, a University of Michigan professor who studies infectious disease ecology and evolution, said that responses to epidemics are more complicated in areas with migratory or unstable populations.

Beyond providing a unique method to gauge population density, Rohani said the Princeton-led project also is notable for the unusually clear relationship it shows between outbreaks and shifts in population density in the first place.

"Traditionally, we've been having to make inferences about what determines the patterns of seasonality we see in disease outbreaks," Rohani said. "The beauty of this study is that they were able to dissect with great precision how the presence of susceptible individuals in the population correlates with and determines the growth rate of the epidemic."

Rohani said that the technique could become important in predicting the peak of measles outbreaks in other susceptible countries, but might also apply to other diseases that, like measles, are driven by population density more than any other factor.

"This is probably the most careful dissection of an epidemic of measles in any setting I'm aware of  it's very careful work that provides a mechanistic explanation for the progression of measles in a large population," he said. "It also shows promise for understanding seasonality in places like Niger for other directly transmitted infectious diseases like meningococcal infections or pertussis, or maybe influenza."

The researchers also are exploring the use of nighttime lights with other large-scale population-tracking methods such as the monitoring of mobile-phone usage. When used alone, both methods have their shortcomings, Bharti said. Nighttime lights imagery is susceptible to weather conditions, while mobile-phone usage data is biased in the portion of the population it can represent, she said.

The research was supported by the Bill and Melinda Gates Foundation.

The findings have been reported in the journal Science.

Blood Pressure Calculator Color Blindness Calculator Accident and Trauma Care Find a Doctor Sanatogen Blood - Sugar Chart Nutam (400mg) (Piracetam) Noscaphene (Noscapine) Blood Donation - Recipients Find a Hospital
This site uses cookies to deliver our services.By using our site, you acknowledge that you have read and understand our Cookie Policy, Privacy Policy, and our Terms of Use  Ok, Got it. Close
×