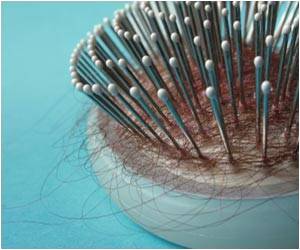 Hair fall has become quite common among several people. Home remedies do not always work when trying to boost hair growth. Inhibiting a family of enzymes inside hair follicles that are suspended in a resting state restores hair growth, revealed a study by researchers at Columbia University Medical Center.

In experiments with mouse and human hair follicles, Angela M. Christiano and colleagues found that drugs that inhibit the Janus kinase (JAK) family of enzymes promote rapid and robust hair growth when directly applied to the skin. The study raises the possibility that drugs known as JAK inhibitors could be used to restore hair growth in multiple forms of hair loss such as that induced by male pattern baldness, and additional types that occur when hair follicles are trapped in a resting state.

Worried about your hair loss? Before you leap into a course of treatment, look at what might be causing your hair to fall.
Advertisement
‘Inhibiting a family of enzymes inside hair follicles that are suspended in a resting state has been observed to restore hair growth.’
Tweet it Now

Two JAK inhibitors have been approved by the U.S. Food and Drug Administration. One is approved for treatment of blood diseases (ruxolitinib) and the other for rheumatoid arthritis (tofacitinib). Both are being tested in clinical trials for the treatment of plaque psoriasis and alopecia areata, an autoimmune disease that causes hair loss.


Dr. Christiano said, "What we've found is promising, though we haven't yet shown it is effective for male pattern baldness. More work needs to be done to test formulations of JAK inhibitors specially made for the scalp to determine whether they can induce hair growth in humans."

The research is published in the online edition of Science Advances.

Using curd and lemon, or getting a hot oil massage during winter months, can prevent hair fall and dandruff, says an expert.

Dandruff or Seborrheic dermatitis affects the skin and is a common cause of hair loss. It is a chronic ...

Hair loss, referred to as alopecia, is a common yet distressing condition that affects young as well as older ...

There are more hair replacement options for women today than there have ever been in history: medical hair ...