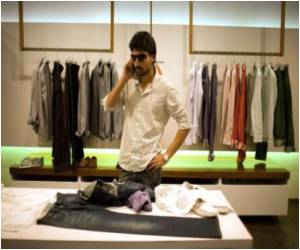 Complete with two cars, foreign holidays, and a cook for their apartment, a family from Beijing seems to be a good example of China's rapid economic growth.

Li Na, 42, a caterer at the capital's zoo, and her husband Chi Shubo, 48, who works for a state-owned investment company, have seen their fortunes transformed since she arrived in Beijing 20 years ago from Shandong, a coastal province.

Then, she cycled for hours from a shared dormitory to visit her husband's workplace. Now she commutes in a car made by an American firm and they holiday with their 11-year-old daughter in Japan, South Korea and the United States.


Tens of millions of others have made a similar transition. About 10 percent of China's 1.35 billion people now count as middle class, according to the Organisation for Economic Cooperation and Development, a figure set to rise to 40 percent by 2020.
Advertisement
But their concerns about air pollution, food safety and China's education system show the challenges facing the country's newly appointed leaders, who have promised a shift away from the model of growth at all costs.

Every year, Li and her husband set a goal to improve their lives. "We always have a plan," Li said. "For example, this year I might want a new camera, and my husband will help make that come true."

The family's four-bedroom apartment in a Beijing suburb was the most important purchase of their lives. "We struggled half our lives to buy it," Li said, over a breakfast of fried eggs and bacon.

In a picture of comfortable suburban living, their daughter, who goes by the English name Nancy, sprawls on a vast sofa opposite a huge flat-screen Sony television, nuzzling the family's fluffy brown dog.

Li says her top priority is Nancy's education. It is not a school day, but her iPhone alarm rings to signal that it is time for the girl's first lesson.

She steers her Chevrolet Epica sedan past forests of near-identical apartment blocks to the Haidian Youth Palace, a relic of Maoist-era China which now holds classes aimed at boosting children's creativity.

At weekends Nancy has sessions in traditional Chinese calligraphy, and a badminton class "with a private coach", Li said. In the past year, the young girl swapped learning the piano for a new instrument, the ocarina, a pocket-sized flute.

Nancy has only three or four hours of free time a day on weekends, Li said, as she seeks to hold her position in China's highly competitive education system.

A glut of graduates created by the expansion of China's university system means the graduate unemployment rate is higher than for the general population -- making winning a place at the very best colleges ever more crucial.

Getting into a top school is also not always about ability, Li said, with cash donations sometimes involved.

"Sometimes parents need to do extra work, give out red envelopes, and even then success can depend on your contacts," she said.

This year has bought some more worrying lessons. When thick smog blanketed northern China, sending pollution levels soaring in the capital, Nancy learned about PM 2.5, the name given to invisible pollutants which can damage children's lungs.

She reached into the pocket of her mother's car seat and pulled out a face mask. "My mum made me wear this every day in January and February because the PM 2.5 was very bad," she said.

At lunchtime, the family gathers in a chain restaurant over plates of braised pork, spicy tofu and buns filled with red-bean paste. But eating out is becoming a rarer treat.

Years of scandals involving poisoned food -- from tainted milk, to reprocessed "gutter oil", taken from drains and sold as new, to rat meat passed off as lamb -- make the family nervous about Beijing's restaurants.

"I try to make sure my daughter eats outside as little as possible," Li said.

At dinner time, Nancy runs to the door to greet her father, while a domestic helper cooks dozens of seafood-filled dumplings. Li Na pulls a bottle of imported Australian wine from a cabinet, before deciding on a New Zealand red.

Worries about safety mean they source their food carefully, ideally from farms near Li's home town, she said, adding: "There is corruption in the industry, which makes the problem worse."

The family have benefited hugely from decades of rapid economic growth, but Li hopes for more from China's new leadership, formally installed in March.

"Ordinary people are losing faith in the government, because of problems accumulating over a long period," she said.

Happiness Dips Due to Stress in Middle Class Chinese Families Living in Big Cities
A survey has revealed that families belonging to the middle class and living in the happening ......

Sports Orientation More in White, Middle Class, and Middle-aged People
Sports would interest you more if you happen to be white, middle class, and middle-aged, says a ......