New Insights into the Health Benefits of Canola Oil 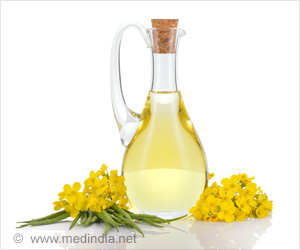 Could canola oil be the ticket to your good health? Studies conducted over the past decade have underlined many health benefits of this dietary oil derived from rapeseed.

High in monounsaturated fatty acids, canola oil was shown to have beneficial effects in people with obesity and diabetes. Some studies also linked consumption of this oil with reduced cancer risk and enhanced intelligence in children.

Advertisement
‘Canola oil contains only seven per cent saturated fat, less than half that of olive oil, widely touted for its health benefits.’

A study published in the journal Obesity towards the end of 2016 showed that including canola oil in a healthy diet might help reduce abdominal fat in as little as four weeks.


Researchers believe that monounsaturated fats in canola oil help reduce abdominal fat which is linked with increased risk for cardiovascular disease, and for conditions such as metabolic syndrome and diabetes.
Advertisement
Another study, published in the journal Diabetes Care in 2014, showed that canola oil should also be one of the oils of choice for people with Type-2 diabetes.

In an experiment involving over 140 people, participants eating canola bread diet experienced both a reduction in blood glucose levels and a significant reduction in LDL, or "bad", cholesterol.

What is more, compared to olive oil, canola oil costs much less, according to Jivo Canola Oil, one of the largest importers and sellers of canola oil in India.

Canola oil is also widely regarded as healthy because of its omega-3 fatty acids contents.

Omega 3 is a key component in the brain's development and effective in the treatment of depression. It is also considered essential for reducing risk of most coronary heart diseases and brain development problems.

Another study by scientists at South Dakota State University in the US found that canola oil reduced the size and incidence of colon tumours in rats.

"This is the first time anyone has done work on the effect of canola oil in animals on colon cancer prevention. Canola oil was able to reduce the incidence of colon cancer in animals almost to one-third," said Chandradhar Dwivedi, who led the study.

The findings, published in the journal Nutrition and Cancer, suggested that using canola oil in household cooking may protect against colon cancer development.

Canola Oil Cuts Heart Disease Risk in Patients With Type 2 Diabetes
Canola oil should be the choice of oil for people with type 2 diabetes, a new study has suggested...

Saturated Fats are Bad for Health, Should be Replaced With Unsaturated Fats
People who ate more saturated and trans fats had higher mortality rates than those who consumed the ...