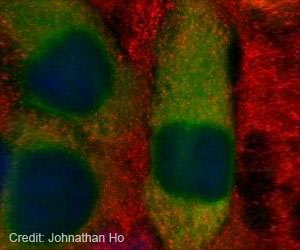 STAT2 - a protein known for guarding against viral infections can also interfere with cell growth and the defense against parasites.  The findings of the study published in the journal PLOS Biology.

Johnathan Ho and Uwe Vinkemeier at the University of Nottingham, UK, and colleagues describe the duplicitous nature of this essential protein, called STAT2, which they discovered while investigating the mechanisms behind interferon signaling.

Test your Knowledge on Viral Infections

Viral infections are extremely common. They may cause minor disease like common cold or life-threatening conditions like AIDS. Test your knowledge on viral infections by taking this quiz.
Advertisement
‘Duplicitous role of STAT2 - an essential protein discovered by researchers.’

Interferons are powerful antimicrobials that can also stop the proliferation of normal and cancer cells. Since their discovery in the early 1950s, intense research into the modus operandi of these molecules culminated 25 years ago, when it was found that interferon requires STAT2 and a closely related partner protein, STAT1, to function. This paradigm has been consistently validated and refined over the last decades. While STAT1 has since been assigned multiple additional roles, STAT2 was thought to function primarily as the partner of STAT1 in interferon signaling. The work published in PLOS Biology reveals an entirely novel aspect of STAT2 as an inhibitor of STAT1, extending its reach far beyond interferon and antiviral immunity. "It's astounding to see such robust antagonistic behavior between two proteins so classically associated with co-operation," says graduate student Johnathan Ho, the paper's first author.


This new research uncovers the molecular mechanism of STAT2's two-faced nature, alongside the development of novel tools that can disarm its enabling and inhibitory behaviors. These new tools make it possible to study previously inaccessible features of STAT2 functioning such as regulation of cellular growth and ageing, blood poisoning and infectious diseases. Moreover, although interferon therapies have proven indispensable for treating a wide range of ailments like viral hepatitis, multiple sclerosis and cancers, their application is hindered by serious adverse effects and unpredictable therapeutic outcomes. The insights offered by this work will be key to overcoming such limitations.

The first six months are an especially sensitive stage in life, viral infections during this stage increase the risk of children developing type 1 diabetes.

Mouse models have been used to study how maternal immune activation influences autism-like behavior, but the mechanism underlying this was not known until now.

How to Reduce School Bag Weight - Simple Tips Post-Nasal Drip Diaphragmatic Hernia Drug Side Effects Calculator Accident and Trauma Care Blood - Sugar Chart Daily Calorie Requirements Turmeric Powder - Health Benefits, Uses & Side Effects Noscaphene (Noscapine) Find a Doctor
This site uses cookies to deliver our services. By using our site, you acknowledge that you have read and understand our Cookie Policy, Privacy Policy, and our Terms of Use