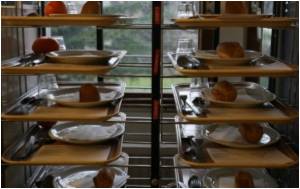 New device developed by researchers tests whether the food is safe for consumption, this could greatly reduce food waste worldwide, say researchers.

Millions of tons of food are thrown away each year because the 'best before' date has passed.

But the listed date is always a cautious estimate, which means a lot of edible food is thrown away.


Researchers at Eindhoven University of Technology, Universita di Catania, CEA-Liten and STMicroelectronics have developed a plastic analog-digital converter circuit that could make in-package food testing possible.
Advertisement
Such circuits could cost less than a penny each, they said, making them economically viable as a food testing aid.

To fight food waste, producers could include an electronic sensor circuit in their packaging to monitor the acidity level of the food, for example.

The sensor circuit could be read with a scanner or with your mobile phone to show the freshness of your steak, or whether your frozen food was defrosted.

"In principle that's all already possible, using standard silicon ICs. The only problem is they're too expensive. They easily cost ten cents. And that cost is too much for a one euro bag of crisps. We're now developing electronic devices that are made from plastic rather than silicon. The advantage is you can easily include these plastic sensors in plastic packaging," researcher Eugenio Cantatore of Eindhoven University of Technology, said.

The plastic semiconductor can even be printed on all kinds of flexible surfaces, which makes it cheaper to use. And it makes sensor circuits costing less than one eurocent achievable.

Source: ANI
Advertisement
<< Insulin Helps in Learning and Memory: Research
Mental Health-substance Use Services in Hospitals Up After ... >>

Stay Healthier This Year By Adding 5 Foods to Your Daily Diet
Add these five foods - Bulgur, Chickpeas, Kale, Spaghetti squash and Sunflower seeds to your ......

Foods Rich in Vitamin D3, Omega-3 May Help Prevent Dementia
Consuming foods that are rich in vitamin D3 and omege-3, such as oily fish, eggs, nuts and ......

Promoting Low-Calorie Foods on Menu may Increase Profit Margin for Restaurants
Food available in restaurants is often found to be unhealthy and containing high amount of ......