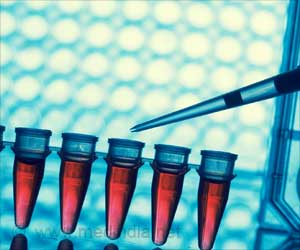 Newly discovered biomarker could pave the way for developing new, personalized treatments for myasthenia gravis (MG), a rare autoimmune disease that causes weakness in the skeletal muscles. The findings of the study are published in the journal Metabolomics.

University of Alberta researchers have identified a unique biological marker that can be used to identify the presence of the rare autoimmune disease myasthenia gravis, predict the course of the disease and identify new, personalized treatments.

Advertisement
‘Unique biological marker to identify the presence of the rare autoimmune disease myasthenia gravis (MG) has been discovered. This new biomarker could pave the way for developing new, personalized treatments for myasthenia gravis.’
Read More..

In a study, neurologist Zaeem Siddiqi, graduate student Derrick Blackmore and their team used metabolic analysis of serum (blood with all cells removed) to find a unique pattern of metabolites--products of the body's metabolic processes such as amino acids, vitamins or antioxidants--that is specific to myasthenia gravis.


Siddiqi and his team first compared the serum of patients with myasthenia gravis to a healthy control group. They then performed a comparison of serum from myasthenia patients to serum from rheumatoid arthritis, another autoimmune disease. After identifying more than 10,000 compounds in the serum samples, they found a unique pattern of 12 metabolites exclusive to patients with myasthenia gravis.
Advertisement
"This is really important because now we have a way to easily separate a patient with myasthenia gravis from someone with rheumatoid arthritis or another autoimmune disease," said Siddiqi, a member of the U of A's Women's and Children's Health Research Institute and the Neuroscience and Mental Health Institute.

"What's more, now we're able to explore how those 12 metabolites change in mild, moderate or severe cases so we can make this biomarker more robust and more effective for predicting the course of the disease and developing treatment plans."

The rare autoimmune disease affects approximately one in 5,000 people, most often women under age 40 or men over 60. Typically, the disease affects the voluntary muscles in the face, head and neck and may affect torso and limb muscles as well. Patients can experience eyelid drooping and double vision, difficulty speaking and chewing, and weakness in the limbs. In severe cases, the disease can affect breathing and swallowing muscles, which can be fatal.

The results highlight the potential metabolomic profiling has in identifying disease biomarkers.

"Right now we don't have the ability to manage myasthenia gravis in a more specific way; we treat all patients the same," said Siddiqi.

"Now we have a unique fingerprint or map of metabolites that can easily separate healthy individuals from those with myasthenia gravis, and a path to the discovery of more accurate and specific treatments."

Biomarkers are useful in managing diseases because they not only help in early diagnosis of a disease, but can also help outline its severity, predict the course and expected outcomes, and indicate what treatments would be the most effective.

According to Siddiqi, current methods for diagnosing myasthenia gravis only tell physicians whether or not a patient has the disease. There are no other biomarkers that can reliably predict the course of myasthenia gravis in a patient, or the best therapeutic response. Although there is no known cure, there are treatments for the disease that can manage the symptoms throughout the rest of the patient's life. Even so, because myasthenia gravis is so rare, treatments can be extremely expensive, hard to find and not tailored to the patient, Siddiqi said.

"Finding the antibodies is good for diagnosis, but they do not tell us how the patient will react to a specific drug or which drug will be most effective," Siddiqi said. "What we're trying to do with this biomarker discovery is develop treatments specific to the needs of the patient, to have more precise management and to be able to more accurately predict the effects of the treatments."

Siddiqi is hoping to soon expand the team's research by examining patients at different stages of the disease to get a more precise picture of how each stage affects the metabolites, and make their biomarker more robust.

Source: Eurekalert
Advertisement
<< Vegans Could be Lacking Vital Nutrient for Brain Health
Seniors: It's Never Too Late to Start a Daily Exercise Routi... >>

New Light Shed On Muscle-weakening Disease Myasthenia Gravis By Researchers
Researchers report that an antibody to a protein critical to enabling the brain to talk to muscles ....

Autoimmune Disease Myasthenia Gravis Halted in Mice By Researchers
A gene-based therapy to stop the rodent equivalent of the autoimmune disease myasthenia gravis was ....

Therapy for Autoimmune Disorder of Muscle Weakness
Myasthenia gravis is a non-inherited autoimmune form of muscle weakness and nearly 60,000 American ....