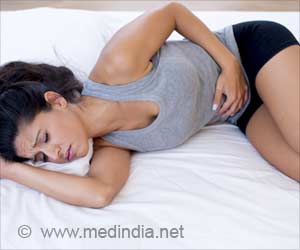 A new app with acupressure-based features has been developed that could help mitigate the pain and cramps women experience during menstruation.

Nearly 50 to 90 per cent of young women experience pain in their lower abdomen during periods, along with other symptoms that include headache, backache, nausea and diarrhoea.

Advertisement
‘New app called Luna has acupressure-based features which could help mitigate the pain and cramps women experience during menstruation.’

The new app named "Luna", developed by researchers at the Charite - Universitatsmedizin Berlin in Germany, can be used as a form of self-care and is suitable for use at home.


Luna has acupressure-based features with instructions on how to administer self-acupressure shortly before and during menstrual cramps .
Advertisement
Acupressure massage uses specific points on the body to treat health problems naturally and restore the harmonious flow of qi energy, among many benefits.

The instructions on the app includes visual descriptions of the pressure points to massage or apply pressure on the body.

These instructions were found to be more effective in reducing menstrual pain than usual care alone, such as taking pain medication and hormonal contraceptives.

For the findings, published in the American Journal of Obstetrics and Gynecology, the team evaluated 221 women suffering from severe menstrual pain, aged between 18 and 34.

The participants were randomly assigned to one of two treatment groups, both of which received the study app and short introduction on how to administer self-acupressure shortly before and during menstruation.

After three months, results showed that 37 per cent of participants in the acupressure group reported a 50 per cent reduction in pain intensity.

Luna has recently been updated and optimised for use with iOS.

Source: IANS
Advertisement
<< Asians Living In UK Have Major Concerns With Regard to Diab...
Study Provides Hope for Patients With Blood Disorders >>

Irregular Periods Not an Issue in Getting Pregnant
Instead of your worrying about conceiving conveniently because of your irregular menstrual cycle, .....

Lifestyle Changes Associated With Irregular Periods
Menstrual cycle isn't always like clockwork. While some women get their periods right on schedule .....

Maternal Suicide On the Rise in Pre-and Postnatal Periods
Suicide is a leading cause of death in developing countries, especially during pregnancy and the ......

Time To Draw A Line Between Monthly Periods and Vaginal Bleeding
Prolonged or heavy bleeds can cause anemia, which may be particularly critical for those who are ......

Claudication
Pain and/or cramping in legs due to inadequate blood flow is referred to as claudication. Common cau...