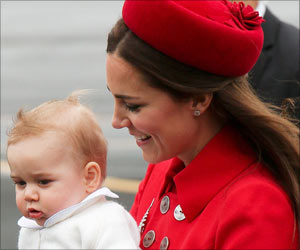 Have you ever wondered how your baby will look when it's grown-up? Thanks to a new aging software that can help parents to have a seek peek of their kid's looks at different stages in their lives.

The scientists at the University of Bradford in Britain had originally developed the software to identify terrorist suspects in crowds. The technology uses visual cues from the child's parents to forecast the future faces of a child.

This is the first princess for Cambridge in about 180 years and there is a real historical significance to this royal baby.
Advertisement
‘The software verifies about the traits inherited by the child from the parent and then uses this information to create images for the child at different points in the future.’
Tweet it Now

The research was led by Dr. Hassan Ugail, professor of visual computing at the university. He said that the parent's genes serve as the blueprint for how a person would look.


"The software differs from current aging software by the addition of an extra layer of information into the program's algorithm. The software can verify which traits the child may have inherited from the parent, and then use this information to create images for the child at different points in the future," explained Ugail.

The software takes any Indian language text as input in Unicode and can convert it to Braille and facilitates the production of Braille textbooks.
Advertisement
The software has an 80 percent accuracy rate by excluding the environmental factors that could still affect or alter the future appearance of a person.

Ugail and his team to test the software tried it on the kids of Prince William and Kate Middleton - Prince George and Princess Charlotte.

The software could also be used to reverse age a person which they tried on actress Angelina Jolie to see what she looked when she was six.

"When we compared these to real images of the actress as a child, the similarities were striking," Ugail said.

Ugail said that beyond predicting looks, the technology could have other uses. He added that someone has approached him to turn it into an app to trace children who have been missing for years.

Bestie, a new free selfie app available for both iOS and Android platforms has been launched targeted at women, which will help capture the perfect selfie.
Advertisement