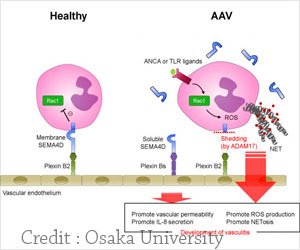 The abnormal responses can lead to autoimmune diseases like vasculitis, AAV, in which the autoantibodies are produced against the neutrophil proteins and the blood vessel walls are destroyed.

The prevalence and incidence of autoimmune disorders such as type 1 diabetes, lupus and celiac disease are on the rise, revealed a study, however researchers at the Centers for Disease Control are unable to pinpoint a cause for this increase. Test your knowledge on autoimmune disorders by taking this quiz.
Advertisement
‘Destroying the neutrophil protein can cause severe autoimmune disease of the blood vessels’
Tweet it Now

SEMA4D is a type of protein that controls the immune responses and can be involved in autoimmunity. However, the functions in neutrophil-associated autoimmune disorders such as AAV are unknown.


Researchers at Osaka University have now shown that SEMA4D normally restrains neutrophil activation, but that it is broken down in AAV patients, leading to inflammation and disease.

Scientists have identified that merlin protein plays a key role in repair of damage to peripheral nerves, providing a new line of treatment.
Advertisement
The team found that expression of the soluble form of SEMA4D was much higher in serum from patients with AAV than in healthy controls, and that levels increased with worsening disease severity. This suggested that SEMA4D could be used as a new clinical marker of AAV, which might improve the accuracy of diagnosis given that current marker expression does not always match disease activity.

To investigate the role of SEMA4D on neutrophils and in the development of AAV, the researchers knocked out its expression in mice then examined the phenotype. "In control mice, the activity of neutrophils in the form of NET production was restrained by contact with another cell type," study first author Masayuki Nishide says. "However, mice lacking SEMA4D expression missed out on this suppressive action, so their NET formation was not reduced."

Further experiments defined the membrane form of SEMA4D as a neutrophil receptor that binds the plexin B2 protein expressed by cells lining the walls of adjacent blood vessels to limit neutrophil activity. Both production of the damaging oxygen-containing molecule and NET formation were shown to be suppressed by membranous SEMA4D.

"In AAV patients, membrane-bound SEMA4D is broken down to its soluble form, which is why higher levels of soluble SEMA4D are detected in their serum," corresponding author Atsushi Kumanogoh says. "The lack of membranous SEMA4D means that inflammation is not suppressed in these patients, while the increased soluble form causes the release of inflammatory signaling molecules."

AAV is currently treated with steroid hormones to limit inflammation, or drugs that are toxic to cells. However, these findings suggest that SEMA4D has the potential to be used as a novel target in anti-AAV therapy.

Cot death syndrome in infants is associated with low levels of a brain protein which regulates sleep arousal.
Advertisement
Medindia on - Autoimmune Disorders - Drugs for its Treatment
List of drugs used to treat the medical condition called Autoimmune Disorders. Click on the drug to find more information including the brand names,dose,side-effects, adverse events, when to take the drug and the price of the drug.

Autoimmune disorders occur when the immune system fails to recognize the body as self and attacks ...

Granulomatosis with Polyangiitis (GPA) is a type of vasculitis that usually affects the upper airways, lungs ...

Multiple sclerosis can be a severely disabling autoimmune disease that affects the myelin or insulating layer ...

Multiple sclerosis is treated with drugs that modify the course of the disease, suppress immunity and relieve ...