Nepal's Transgenders may be Barred from Voting 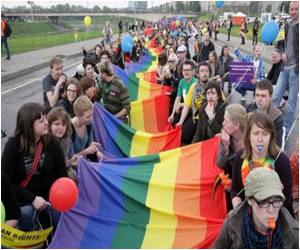 Nepalese transgender Nazia Shilalik says her gender has cost her jobs, respect and may also cost her a vote in upcoming elections.

Transgenders had high hopes six years ago when Nepal's Supreme Court approved third gender citizenship -- part of a judgment that ordered the government to enact laws to guarantee the rights of all lesbian, gay, bisexual and transgender (LGBT) people.

But now the fundamental human rights changes that transgenders anticipated look elusive because of a lack of documentation proving their identity.


"I would love to (vote), but I know I will not get the chance because I am a transgender person," said Shilalik.

Despite the landmark ruling, the vast majority of transgender people in Nepal are still waiting to obtain vital documentation officially recognising their third sex gender.
Advertisement
The citizenship certificates, which serve as national ID cards, are required to open bank accounts, buy and sell property, apply for a job and acquire a passport.

Yet the president of a prominent LGBT campaign group in the Himalayan nation estimates that just three out of 200,000 Nepalese transgenders have managed to change their citizenship from male/female to third gender -- largely because of official intransigence and prejudice.

The result is thousands of disenfranchised transgender voters.

Shilalik has bitter memories of her previous attempt to participate in Nepalese democracy.

Five years ago -- just 15 months after the Supreme Court passed its landmark law that approved third gender citizenship -- an excited Shilalik headed out to vote in Nepal's first democratic elections since the end of a decade-long civil war in 2006.

When Shilalik, who says people are "always making fun of me on the street because I look like a girl and sound like a boy", arrived at the polling station in Kathmandu, she noticed two queues for men and women.

There were no queues for third-gender voters.

"I went to the line that said male, but they asked me to leave because I looked like a woman. When I went to the women's line they said no you cannot vote," she told AFP.

Nepal and neighbouring India have a long tradition of transgender people, commonly known as "hijras". They are considered auspicious at weddings, where they are often paid to sing, dance and give blessings to the couple.

But they are also marginalised and face intense discrimination, living on the extreme fringes of South Asian society. Many experience grave difficulties finding jobs and resort to prostitution and begging.

"There was no space for gay rights or transgender rights in our legal discourse at the time," he told AFP.

The ruling changed all that, he said, by giving the LGBT community a powerful platform to push their concerns in the conservative, largely Hindu country.

Six years on, however, an overwhelming number of Nepalese transgenders possess no documentation in the form of citizenship cards or passports.

"Despite the progressive judgment, too many government bureaucrats still have a discriminatory attitude, making it difficult for people to get third-gender citizenship," Phuyal said.

As a result, he is now back in court on behalf of leading LGBT rights group The Blue Diamond Society, which filed a case in September against authorities for failing to provide citizenship cards to transgenders.

Activists say the process of changing existing male/female ID cards to third-gender cards requires mountains of paperwork and its success depends entirely on the discretion of local bureaucrats who issue the documentation.

"You need a letter from the village committee, then the municipal authority, all these different people to prove your citizenship," Sunil Babu Pant, the Blue Diamond Society's president, told AFP.

According to him, only three out of some 200,000 Nepalese transgenders have managed to change their citizenship from male/female to third gender.

Four transgenders are running in Tuesday's election, but none of the three largest parties -- the Nepali Congress, the Maoists and the Unified Marxist-Leninist (UML) party -- has nominated openly LGBT candidates, a situation which has prompted the Blue Diamond Society to call for a vote boycott.

"We are urging LGBT members not to vote in these elections. We are protesting because the three main parties have ignored us," Durga Thapa, a Blue Diamond Society activist, told AFP.

Pant, who became Asia's first openly gay lawmaker in 2008, is not running for elections this time but says he will lobby his UML party to nominate more LGBT candidates in future.

"We are not going to stay silent, we will push for change. Our democracy must accommodate every citizen," he said.