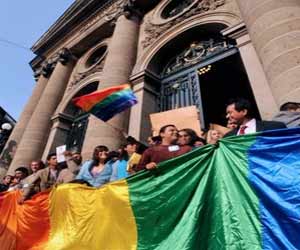 With the 2013 Miss Universe contest set to be held in Russia, the pageant's host, Thomas Roberts who is openly gay, has criticized the recent legislation signed by the Russian government which bans gay 'propaganda'.

"The Russian laws obviously are a dark time and a dark chapter in LGBT history here," Roberts told AFP after arriving in Moscow with his husband ahead of the Miss Universe final on Saturday.

"They're seeking a solution to a problem that doesn't exist and meanwhile it causes new problems because it allows people to abuse and hurt and vilify the LGBT community under the guise of some propaganda law that's just ridiculous."


The co-host of Saturday's Miss Universe final married his partner last year after publicly coming out in 2006. He hosts "MSNBC Live", a daily news show.
Advertisement
President Vladimir Putin in June signed a law banning promotion of homosexuality to minors that has prompted international outrage and fears that its wording can be used to outlaw any gay pride event.

Similar laws had previously been passed at local level in several cities.

"These laws represent the fact that the government is seeking a solution for a problem that doesn't really exist. There really is no reason to demonise the LGBT (lesbian, gay, bisexual and transgender) population," said Roberts.

"In this atmosphere here we're seeing the problem with homophobia being condoned and these laws actually allowing people to be victimised."

Among the celebrities to criticise the gay rights situation in Russia are US pop stars Madonna and Lady Gaga. Openly gay British actor Stephen Fry called for Russia to be barred from holding the Olympics in Sochi.

Roberts is co-hosting Miss Universe after its regular co-host Andy Cohen, who is also gay, pulled out, saying he was not comfortable with coming to Russia because of the law.

Roberts said on his show on Tuesday that he had faced accusations of being a "LGBT sellout" for not boycotting the event in Moscow.

He came to show his "support of the LGBT community in Russia... as a journalist, an anchor and a man who happens to be gay," he said in a statement.

Russian opposition activist and television host Ksenia Sobchak on Thursday praised Roberts for his decision to come and "show an example."

"I was never a fan of Miss Universe but now I will be," she wrote on Twitter.

Roberts said he did not know whether his orientation would be mentioned during Miss Universe.

"If it does (come up) -- great. If people and the viewers at home that are watching learn more about me and know that I'm married and my husband is here, I think that's fantastic."

Roberts has regularly covered gay rights in Russia on his show.

He criticised what he called a "disturbing trend" for US conservatives to advise Russian lawmakers on gay issues.

Writing on Twitter, a Russian lawmaker quoted Cameron as saying that statistics showed 15 percent of gay people thought it was OK to have sex with children aged under 15.

But Roberts said that he believed the fact that US conservatives were turning to Russia proved their strategy had failed at home.

Such attempts "to try to enact homophobic laws only prove how much they're failing back in the US," he said.

US Lawmakers Pass Gay Rights Bill
A historic gay rights bill that prevents companies from hiring and firing employees based on their ....